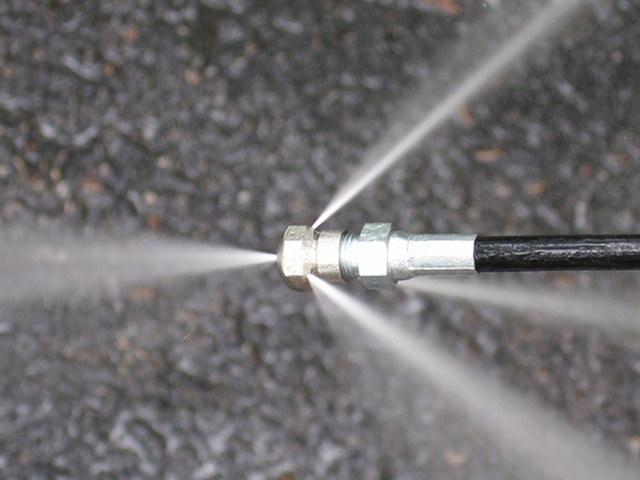 A plumbing Jetter is a type of high-pressure hose with a high-pressure nozzle on the end. Plumbers use jetters to help them unblock drains and sewer pipes if they are clogged.

Having a blocked toilet can be a real problem. If you only one of your toilets is blocked and all of your other drain pipes (sinks) flow freely, then you probably have a localised issue, like one of your sinks is blocked you can unblock it yourself. However, if all of your toilets and drains are blocked the problem will be further down the drain in the main sewer pipe. In this case it is likely a larger problem a plunger probably will not fix the problem. This is where a jetter can be used to go down deep into the drain to unblock it.

How Does A Plumbing Jetter Work?

A plumbing Jetter is a high-pressure hose and can have different nozzles on the end for different purposes. Some nozzles have backward-facing water jets that push the hose further down the drain. Other nozzles have those backward facing jets but also have forward-facing jets that are designed to cut through any materials (such as tree roots) that are blocking the drain. The Jetter hose is connected to a high-pressure pump that can make the nozzle squirt water at super-high pressure (e.g. up to 5000 psi).

How Does A Jetter Unblock Drains?

A plumber will feed the Jetter down an inspection point in the sewer pipe. Often the plumber will need to twist the hose around or pull the hose back and forward so that the nozzle will go around any bends in the sewer pipe. When the nozzle reaches the blockage the high pressure cuts through the materials like excess paper towels or foreign objects or tree roots. Once the materials have been sliced up by the jet of water the pressure of all the water behind the block pushes the remaining materials causing the block through the pipe.

In addition to a Jetter, good plumbers will also use special pipe cameras with its own light that are on the end of a wire that is connected to a closed-circuit television screen (CCTV). This camera will be fed down the pipe so that the plumber can see and insect the pipe for blockages,  breakages and other issues. Most of these CCTVs have a locator on them so that the plumber can use another device to locate above where the camera is so that they know where to dig if they need to fix a pipe.

Is it common for plumbers to use a Jetter to unblock drains?

How much do Jetters cost?

How Much Does It Cost To Get A Drain Jetted By A Plumber?

Different plumbers charge different amount and may charge a premium for after-hours work, However, in Melbourne, Australia is can cost from between $250 to $500+ to hire a plumber to jet and unblock your drain. Often plumbers will charge on an by the hour basis and pass on any rental costs if they do not own the Jetter. This why is is usually cheaper to hire a plumber who specializes in drain unblocking (as opposed to other plumbing tasks like fixing water heaters and drain cleaning) as they will have all of the required equipment and will not need to hire it.

Be sure to hire a reputable plumber to unblock your drain. Some un-reputable plumbers will just pump out water without removing the blockage. Your toilet and sinks will flow again but only temporarily until the pipes fill up again. So you should always ask the right questions from the plumber before you hire them to make sure that they are reputable.