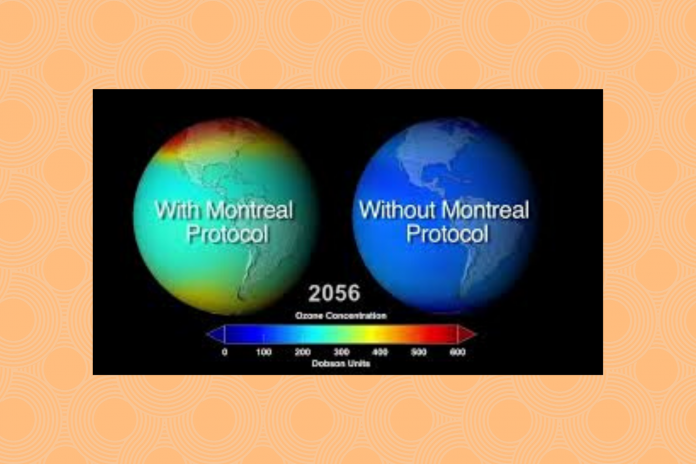 It was the work of Crutzen, Mario Molina, and Frank Sherwood Rowland that led us to the conclusion that stratospheric ozone absorbs most of the UV-B (Ultraviolet – B) reaching the surface of the planet. So, a depletion of the ozone layer would result in the increased levels of UV-B radiation at the surface. Skin cancer, damage to crops and marine phytoplankton are some of the negative impacts due to the depletion of the ozone layer. In the year 1995, Paul J Crutzen, Mario Molina and Frank Sherwood Rowland were jointly awarded The Noble Prize In Chemistry, for their work in ” atmospheric chemistry, particularly concerning the formation and decomposition of ozone.”

By the 1990s, the world was just beginning to understand the problem of the ozone layer. Owing to technological advancements, industrial evolution and a rising of the ‘wise man’ led to a global problem of ozone depletion. The UN looked into this problem and in response, designed the Montreal Protocol. It is an international treaty to protect the ozone layer.

The Montreal Protocol is the most successful international environmental agreement to date. According to the most recent (2006) scientific evaluation, the effects of Montreal Protocol states – “The Montreal Protocol is working. There is clear evidence of a decrease in the atmospheric burden of ozone-depleting substances and some early signs of stratospheric ozone recovery. However, a more recent study seems to point to a relative increase in CFCs due to an unknown source.”

On January 1, 2019, the Kigali Amendment to the Montreal Protocol was implemented according to which countries will reduce the production and consumption of HFCs (Hydrofluorocarbons) by 80 percent in the next 30 years. On 27th December, 65 countries had ratified the amendment.

NUMBERS SAY IT ALL

I express my heartfelt gratitude to all the industrialised nations, that have come together with scientists and researchers and turned this Protocol into a milestone victory. As in the Netflix show, Money Heist, the Professor teaches the class about Divide et Impera which means ‘divide and conquer’ but for a better tomorrow, I think we need to follow the policy of Conduc et Impera, which means ‘Unite and Conquer’ – this also inclines towards a cooperative relationship between Industrialists, Nature and Environmentalists. Development is a sign of growth for any country but we need to stop disrupting the balance just to be an edge ahead. This historic treaty is a piece of evidence that if Industrialists and Environmentalists come together, they can seek mutual benefits and serve humanity.

The conundrum lies between Money and Nature – though alphabetically ‘M’ comes before ‘N’, that doesn’t mean the ‘N’ that stands for nature needs to be ignored. Montreal Protocol is proof that if all of us come together we can achieve our quest to save the planet, and give equal importance to both the alphabets when the time is right.