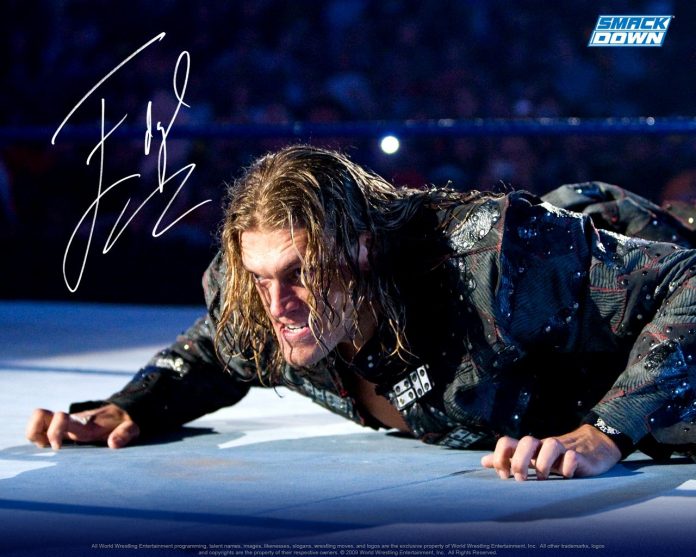 WWE Smackdown has always been my favourite wrestling show before the rise of NXT. Pure Wrestling, unmissable storylines and the rise of the most exciting wresters generation after generation made Smackdown the land of opportunities. Let’s look at 6 of the top superstars in WWE Smackdown ever.

Of the numerous unforgettable memories of Angle’s illustrious career, many of the standouts occurred while he made the Smackdown brand his home. The highly-successful Angle twice won the WWE Championship as a Smackdown superstar, twice carrying the title into WrestleMania representing the Blue Brand. In addition to a run as the show’s commissioner and helping to launch the careers Team Angle (Charlie Haas & Shelton Benjamin), Angle also was at the heart of many of the most memorable feuds in brand history. His bouts with Brock Lesnar, Rey Mysterio, Eddie Guerrero, HBK ( I am a sexy Kurt, sexyyyy Kurt. I make your ankle hurt, ankleeee hurt) and The Big Show are highlights of the show’s history, as is of course his open challenge match against a no-name jobber by the name of John Cena, who would go on to do a few things in his career.

It was one of Dwayne “The Rock” Johnson’s famous catchphrases that led to the show’s name and “smackdown” becoming an official word in Webster’s Dictionary. The Great One not only appeared on the program’s very first episode on Aug. 26, 1999, in Kansas City, Mo., but he made it clear in the opening segment that SmackDown was his show. The Rock battled Triple H in the Smackdown debut show and HBK showed why he can steal the show even as a referee.

There are certain Superstars who will always belong to Smackdown. This is the case with Rey Mysterio. After making his WWE debut on the blue brand on July 25, 2002 — an episode so great that WWE.com hypothesized it could be the best SmackDown show ever — The Master of the 619 went on to win multiple WWE Tag Team and Cruiserweight Championships on SmackDown’s stage. The Ultimate Underdog made a career of overcoming the odds in legendary battles against much larger foes such as Big Show, Batista and JBL.

Since making his WWE debut on SmackDown in 2002, Batista used the blue brand as a backdrop for some of his most notable rivalries, engaging in epic clashes against main event Superstars such as Rey Mysterio, The Undertaker, JBL and others as a consistent headlining force on Thursday and Friday nights for many years. The six-time World Champion had his fair share of significant SmackDown moments, including winning the WWE Tag Team Titles with Rey Mysterio in tribute to the late, great Eddie Guerrero. In fact, it was the then–World Heavyweight Champion who led Team SmackDown to brand supremacy over Team Raw at Survivor Series 2005.

‘Here Comes The Pain’ was the calling card for the beast that would go on to become WWE’s greatest crossover athlete of all-time. Smackdown- Here comes the pain video game on PS2 became a super-hit mainly due to Brock Lesnar’s persona. Accompanied by Paul Heyman, Lesnar hit Smackdown like a true F-5 hurricane in 2002, shortly after winning the King of the Ring tournament. Lesnar quickly feuded with the best of the best, including Hulk Hogan and The Rock, who he defeated for the WWE Undisputed Championship at the age of 25, becoming the youngest champion in WWE history.

The Face That Runs the Place isn’t just a fun nickname “borrowed” from John Cena: It’s an apt description for what AJ Styles has turned into for SmackDown brand since the 2016 WWE Draft, during which The Phenomenal One was a first-round draft pick (No. 4 overall). Since then, Styles earned decisive victories against the likes of Cena, Dean Ambrose, Dolph Ziggler and Randy Orton en route to two WWE Title reigns and the distinction of becoming the longest-reigning WWE Champion in SmackDown history, surpassing JBL’s record of 280 consecutive days.

There is Top WWE list without the Demon of Death Valley- the Deadman, The Undertaker. If WWE is The Undertaker’s home, then it could be true that SmackDown became his personal horror house. For it was from the big blue staging ground that The Demon of Death Valley carried all three of his World Heavyweight Championship reigns and launched epic rivalries against everyone from Randy Orton to Mark Henry to Batista to Edge to CM Punk — showdowns that, in many cases, evolved into crucial portions of The Phenom’s WrestleMania Streak.

Viva La Rasa! It was under this umbrella that the “lie, cheat and steal” mantra of Eddie Guerrero thrived and resonated in everyone’s ears till this date. Whether Latino Heat was disarming the Divas or harming the competition, Guerrero always left the WWE Universe screaming “Viva la Raza!” His quest to push the show where it had never gone before created countless SmackDown moments from a Frog Splash off the top of a steel cage to steamy shower scenes to United States Championship Parking Lot Brawls.

You Think You Know Me! When Edge made history in 2006 as the first Superstar to cash in the Money in the Bank contract, his career rocketed ahead with no end in sight. The Rated-R Superstar raised eyebrows with his in-ring shenanigans with Lita on Raw, reached new heights of greatness with heart-pounding Ladder Match performances, and found a home on SmackDown. The ‘Ultimate Opportunist’ made the most of his opportunities on Thursday nights and became the greatest all-around performer in the history of the Blue Brand. From his epic battles with The Undertaker — as well as an emotionally charged on-again, off-again relationship with Vickie Guerrero — Edge made SmackDown must-see TV for the WWE Universe for years. An injury forced him to suddenly retire in 2011, but Edge miraculously returned at this year’s Royal Rumble after taking his rightful place in the WWE Hall of Fame in 2012.