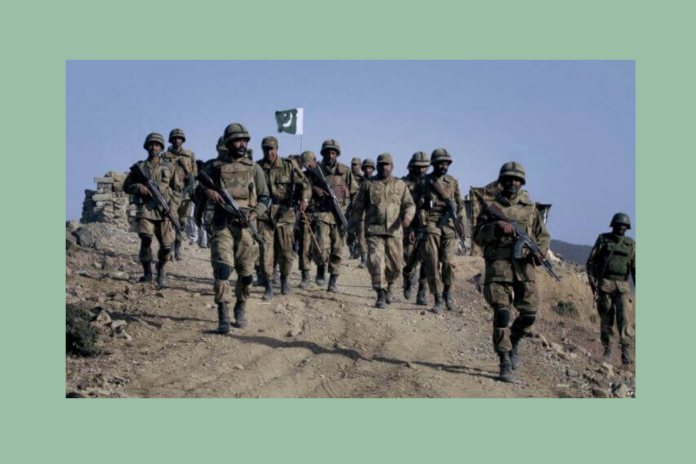 Shaken by the two significant actions of the Modi government last year – the air strike on terror camps in Balakot and the nullification of special status of Jammu & Kashmir – the Pakistan Army has recalibrated its proxy war tactics against India.

Pakistan Army has decided to go big on psychological warfare, revive home-grown native terrorism in Kashmir against India and use Indian authors like Arundhati Roy”s criticism of India as propaganda material to Islamabad’s advantage.

All this and more was revealed in the latest edition of the Green Book 2020 published by the general headquarters of the Pakistan Army.

The Green Book is a confidential internal publication of the Pakistan Army which outlines its geo-political understanding, vision and strategies. Apart from Pakistan Army chief’s views, it includes essays on policy recommendations written by specialists of defence forces and strategic thinkers of the country.

In the 200-page book, a copy of which was accessed, Pakistan Army chief General Qamar Javed Bajwa has written that the two decisions taken by Prime Minister Narendra Modi last year, the Balakot strike on February 26 and reorganisation of Jammu &; Kashmir state on August 5, will have “lasting imprint on the geopolitics” of the region.

Bajwa described the Balakot strike as a “coercive attempt to carve out space for war under nuclear overhang and enforce compellence.” Modi’s Kashmir decision, Bajwa said, has “raised the ante for the entire world.”

Recognising that India is backed by the US and American efforts to contain China’s rise are promoting India, one of the suggestions was to warn Washington that Pakistan will shift its forces from its Western borders, which can adversely affect peace in Afghanistan, if New Delhi was allowed to pursue its Kashmir policy.

The book also contained conspiracy theories like “increased proliferation of WMDs, due to Indo-US nuclear deal and the RSS hold over Indian nuclear weapons and its armed forces” and Indian external intelligence agency RAW “established a special cell at a cost of $500 million” to sabotage the China-Pakistan Economic Corridor.

China as a reliable strategic ally was repeatedly emphasised in the book. In one of the essays, Chinese President Xi Jinping’s quote – “No matter how things change in the world and the region, China will firmly support Pakistan in upholding its sovereignty, independence and territorial integrity and dignity” — was highlighted.

The other recommendation was to take Pakistan”s proxy war against India into the “non-kinetic domain” like information or cyber or electronic warfare. For this, Pakistan Army has been advised to run propaganda using video clips and pictures about “brutalities of Indian oppressive forces” in Kashmir to alter the perception about India, which it has “built so painstakingly over the years”.

“Modi’s India is bound to get stuck and sink in the Kashmir quagmire,” the essay by Senator Hussain said, while Ambassador Shamshad Ahmad Khan wrote, “Kashmiri youth are dying on the streets, not asking for jobs and employment opportunities. They are holding the Pakistan flag; it is a clear verdict!”

One major suggestion offered to the Pakistani Army was that it should revive “local uprising” in Indian Kashmir and make it difficult for “India to keep selling the terrorism card” in Kashmir.

“Only a native uprising will be just and politically defendable for Pakistan on international forums. Even such an uprising will need support in the information domain,” an essay said.

Professor Tughral Yamin in his prescription about future wars with India said that as long as Kashmir was unresolved, “there will be plenty of triggers to cause another crisis (for India) in the future.”

Yet another writer advised that “Indian masses and liberal intellectuals” should be the recipients of Pakistan”s information dissemination campaign on Kashmir.

The only scholarly piece in the book, ”Security Competition between US and China and Impact on Regional Strategic Balance of South Asia”, was written by Rizwana Karim Abbasi who recommended bilateral dialogues between the US and China and simultaneously between India and Pakistan.