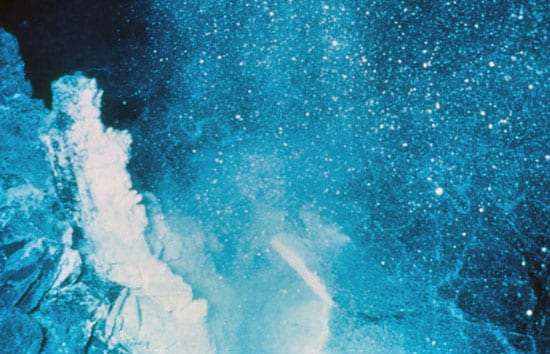 Researchers have discovered single-celled creatures living deep beneath the seafloor — in tiny cracks inside volcanic rocks millions of years old — that can give us clues about life on Mars.

Researchers estimate that the rock cracks are home to a community of bacteria as dense as that of the human gut, about 10 billion bacterial cells per cubic centimeter (0.06 cubic inch).

In contrast, the average density of bacteria living in mud sediment on the seafloor is estimated to be 100 cells per cubic centimeter.

“I am now almost over-expecting that I can find life on Mars. If not, it must be that life relies on some other process that Mars does not have, like plate tectonics,” said Associate Professor Yohey Suzuki from University of Tokyo, referring to the movement of land masses around Earth most notable for causing earthquakes.

“I thought it was a dream, seeing such rich microbial life in rocks,” Suzuki added.

Undersea volcanoes spew out lava at approximately 1,200 degrees Celsius which eventually cracks as it cools down and becomes rock.

The cracks are narrow, often less than 1 millimeter (0.04 inch) across.

Over millions of years, those cracks fill up with clay minerals, the same clay used to make pottery. Somehow, bacteria find their way into those cracks and multiply.

“These cracks are a very friendly place for life. Clay minerals are like a magic material on Earth; if you can find clay minerals, you can almost always find microbes living in them,” Suzuki said in a paper published in Communications Biology.

The microbes identified in the cracks are aerobic bacteria, meaning they use a process similar to how human cells make energy, relying on oxygen and organic nutrients.

Suzuki and his colleagues discovered the bacteria in rock samples that he helped collect in late 2010 during the Integrated Ocean Drilling Programme (IODP).

The research ship anchored above three locations along the route across the South Pacific Gyre and used a metal tube 5.7 kms long to reach the ocean floor.

Then, a drill cut down 125 meters below the seafloor and pulled out core samples, each about 6.2 centimeters across.

“The collection sites were not near any hydrothermal vents or sub-seafloor water channels, so researchers are confident the bacteria arrived in the cracks independently rather than being forced in by a current,” the study said.

The clay minerals filling cracks in deep ocean rocks are likely similar to the minerals that may be in rocks now on the surface of Mars.

Suzuki’s research team is beginning a collaboration with NASA’s Johnson Space Center to design a plan to examine rocks collected from the Martian surface by rovers.