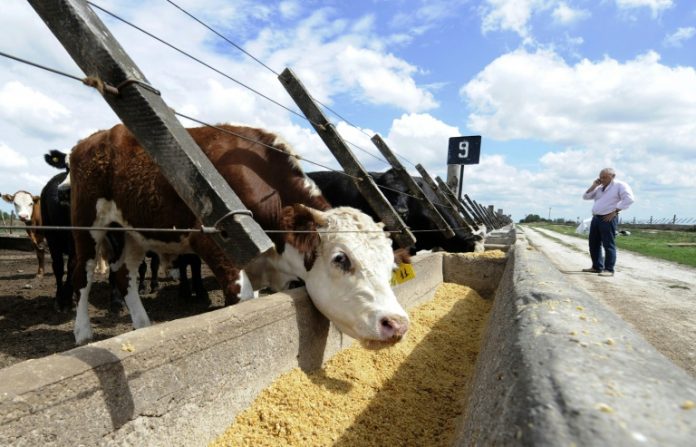 The United Nations has warned of an impending food shortage due to the coronavirus pandemic as major exporters such as Argentina find it increasingly difficult to sell their produce.

Argentina is a land of plenty, producing cereals, vegetables, meat and fruit, all products that will always be in demand somewhere.

And yet its export industry has been badly affected by the worldwide lockdown provoked by the virus, which the UN says could lead to global export restrictions.

In 2019, Argentina was the largest exporter in the world of soy flour and soy bean oil, and third for corn. It’s also a major exporter of meat and vegetables.

But those exports started to slump in January when the new coronavirus began spreading in China, a major trade partner.

Raul Victores, who runs a livestock farm in Buenos Aires province, was one of those affected.

At the start of the year “there was a lot of meat travelling (to China) when they said they weren’t happy with the prices,” Victores told AFP.

AFP/File / Ivan PISARENKOA soybean field is fumigated in Entre Rios Province, Argentina, which in 2019, was the world’s largest exporter of soybean flour and soybean oil

“The meat processing people went there and dropped the prices (because) they stopped imports for a few days.”

Argentine exports in February were down 35 percent against the same month in 2019, the state statistics institute said.

The Argentine Chamber of Commerce said that for “food exporters the initial impact of COVID-19 was seen in the commercial relationship with China, mainly in the meat and oilseed sectors.

“This was seen not only in smaller quantities of exports but also lower prices.”

European markets also halted purchases, meaning farm produce was either being held in processing plants with nowhere to go, or sometimes being sent out but not necessarily reaching its final destination.

“There was chaos in the world and that was felt in the sales,” said Victores.

His business, which exports 4,000 tons (tonnes) a month to 80 countries, has suffered since Argentina went into lockdown on March 20. Sales for March fell by 50 percent.

AFP/File / Juan MABROMATAContainers pictured in 2018 at a terminal at the docks in Buenos Aires, Argentina — the country’s vital exports started to slump in January when the new coronavirus began spreading in China, a major trade partner

“We’ve had a lot of sales we haven’t been able to get out,” Fragola told AFP.

“Those from March have to wait ’til April.”

The mandatory lockdown of the population in Argentina will last until at least April 13.

Fragola hopes to be able to send out the backlog from March within two weeks if the lockdown is lifted.

Some sales have also fallen through due to the demands of some importers.

“In Qatar they asked us for a certificate of treatment of the merchandise to prevent coronavirus. Rather than writing something we don’t know anything about we preferred not to do businesses,” said Fragola.

“It’s a shame because we lost the business. They lost the produce.”

For Daniel Vainstein, a honey exporter from Entre Rios province that borders Uruguay to the east, the lack of personnel at every stage of the distribution network has been the major difficulty.

“There are problems with internal freight due to less people working. Public agencies are delaying documentation due to a lack of personnel. In the Parana customs, of the 16 people that usually work, there are now six or seven,” Vainstein told AFP, referring to the Entre Rios state capital.

Another problem is sourcing supplies such as honey jars.

As the frequency of vessels carrying goods up the Rio de la Plata have fallen, the costs of their services have risen.

“There’s a lack of space in the (shipping) containers and in the boats. Less availability increases the costs,” said Vainstein.

Argentines themselves are in no danger of running out of food, but exporters fear that their businesses may go under if they cannot trade with overseas partners.

“Here there’s no lack of food but it would be suicide for the Argentine economy to stop exporting,” said Victores.