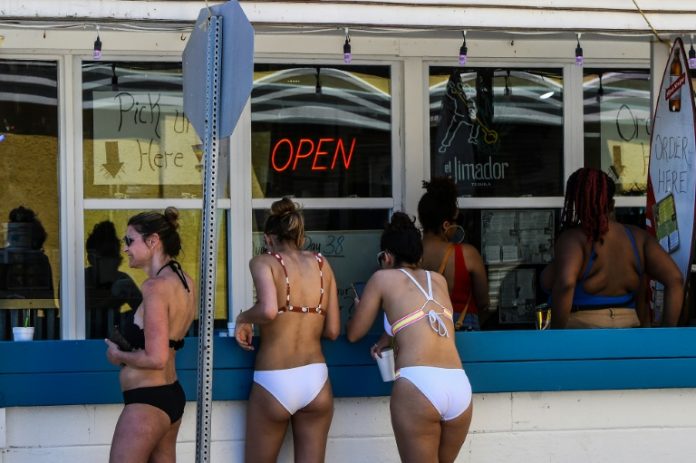 After being locked down for weeks, many residents in Georgia are thumbing their noses at the deadly coronavirus and seeking sanctuary in the sun, sand and waves of the southern state’s beaches.

Under a cloudless blue sky with balmy temperatures and soft breezes rolling off the water, Tybee Island proved a powerful weekend lure Saturday for Georgians desperate for any return to normalcy — and an escape from self-imposed isolation.

“How long are we supposed to imprison ourselves?” a bikini-clad Mackenzie Scharf, 30, said to NYK Daily as her five-year-old son flew a Spider Man kite.

“This is much safer than going grocery shopping.”

Children play with their father on Tybee Island, Georgia, a laid-back tourist destination on the Atlantic coast

“It feels great — like it’s supposed to feel,” said 39-year-old mother and housewife Rachel Lilly, barely lifting her head from a watermelon-themed towel as she enjoyed her first beach trip of the year.

“I’m not concerned” about catching coronavirus, “as long as it’s not packed,” she said. “But if everyone does what we’re doing, that’s a problem.”

Locals said Saturday was the busiest beach day of the year so far for Tybee Island, a laid-back tourist destination on Georgia’s Atlantic coast.

Several hundred people were on the sand strolling, jogging, throwing footballs or wading in the mild waves.

Social distancing was generally in effect. But masks or other protective gear? Forget about it.

“It’s just nice to, you know, come up for a little air,” silver-haired attorney Brian Monroe, 49, said after throwing a Frisbee with his daughter.

“When the beach is sparsely populated like this it’s not too hard to social distance.”

One block off the sand, sun-splashed youths wearing sandals and long swim trunks scanned their phones and held red plastic cups as they rode cruiser bikes through quiet streets.

The smell of sunblock lingered. A motorcycle group rumbled down the main drag, Butler Avenue. Restaurants and smoothie shops were providing take-out for beachgoers.

This was not the scene that Tybee Island’s Mayor Shirley Sessions envisioned.

She shut the community’s beaches several weeks ago as a measure to contain viral spread. But this month Georgia Governor Brian Kemp overruled her with an order of his own.

Neighbors South Carolina and Florida have both opened some of their beaches.

But Georgia has gone further. On Friday, Kemp gave permission for some small businesses to re-open statewide, including barber shops, bowling alleys and nail salons, provided protective health measures were in place.

Realtor and 40-year Tybee Island resident Harold Heyman said he’s all for Georgia and other states throwing the doors of their businesses wide open, health concerns be damned.

“Get it on,” the bronzed and shirtless 75-year-old grinned as he walked toward his beachside home.

Heyman scoffed about the concern someone his age might have about contracting a virus which has already infected more than 925,000 people in the United States, 53,000 of whom have died.

As for defying a crisis to hang out at the beach, swim, and soak up the sun, “this is my way of being healthy,” he added.

A man walks in the historic district in Savannah, Georgia, where the coronavirus pandemic has hit the tourist-focused city hard

Many of Savannah’s hotels and restaurants are temporarily closed, and its famed haunted tours have also been halted.

Locals rode through town on bicycles but few tourists were walking the historic streets or snapping photographs in Chippewa Square.

Savannah Mayor Van Johnson said he believes it is “absolutely premature” to open, given the city has yet to meet White House guidelines for opening up business, including 14 straight days of declining infections.