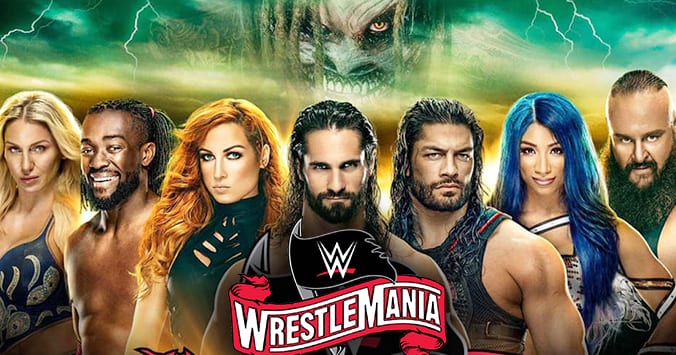 It is April and the granddaddy of the them all Wrestlemania is finally here. This year’s Wrestlemania will be one of the most critical one indeed. Why am I saying so?

Let’s begin with our Wrestling mania preview without further delay, because as I mentioned above, no matter what happens, the show MUST go on.

The Undertaker vs. AJ Styles (Boneyard match) – I believe the Deadman will win after an amazing back and forth match up. It should be kept short considering The Undertaker is old now. Interference is due from AJ Style’s bodyguards. I wishes this match happened 6 years ago. It could have been an instant classic. Predicted Rating: 3.25/5

Roman Reigns Brawn Strowman vs. Goldberg (Universal Championship) – No WWE, NO! Don’t let Goldberg retain this one. I want Brawn Strowman to win this match. This will be a short brawl with too many spears. Will we get to see a Jackhammer? Hope Goldberg doesn’t botch the move. Predicted Rating: 2/5 (The match is just a shock value)

Bray Wyatt vs. John Cena (Firefly Fun House match) – I so wished for a crowd. I am not sure how good a Firefly Fun House Match could be. Cena doesn’t need the win. Bray Wyatt will prevail for sure. Don’t have those weird red lights while the match is going on, WWE. Predicted Rating: 3.5/5 (if the stimulation is not weird)

Edge vs. Randy Orton (Last Man Standing) – The build up to this match has been nothing short of spectacular. It sucks to not have a crowd for this match. Edge will win? Anything can happen in WWE but I am leaning towards a Rated R victory. Predicted Rating: 4/5 (Don’t make it too slow)

Becky Lynch vs. Shayna Baszler (Raw Women’s Championship) – Again, a good build up for the match. Will Becky lose? I don’t think so. Ronda Rowsy might interfere too. This match can go many ways and I am not complaining. Predicted Rating: 4/5.

Rhea Ripley vs. Charlotte (NXT Women’s Championship) Same as Becky Vs Shayna. This is past vs future. I am considering Rhea as the winner. Charlotte doesn’t need to win this one. (Predicted Rating: 3.75/5)

Bayley vs. Naomi vs. Tamina vs. Lacey Evans vs. Sasha Banks (SmackDown Women’s Championship) – This match is only happening so that the other women on the roster can get their wrestlemania moment. It can be a decent fast paced match with Sasha prevailing. (Predicted Rating: 3/5)

Kevin Owens vs. Seth Rollins – Kevin Owens is the best man in the WWE roster at the moment. He will have his Stonecold Vs Bret Hart moment with Owens refusing to quit. Predicted Rating: 4/5

Sami Zayn vs. Daniel Bryan (Intercontinental Championship) – This will be really interesting. It can steal the show if WWE gives them 20 minutes in the ring. If the match is not kept short and they go out for 20 minutes without unnecessary interruption, it can legit be the match of the year. Predicted Rating: 4/5

The Kabuki Warriors vs. Alexa Bliss and Nikki Cross (Women’s Tag Team Championships)- Asuka should’ve been pushed as a main event wrestler. This match is a bit underwhelming for her. Predicted Rating: 2/5

The Miz and Morrison vs. The Usos vs. The New Day (SmackDown Tag Team Championship ladder match) – This can also steal the show. I love ladder matches. Give them 15 minutes, and they can write their names in history books yet again. Predicted Rating: 4/5

How excited I am for this year’s Wrestlemania?

I am happy with WWE’s decision of splitting Wrestlemania in two parts. The event will take place for two days now. This will make sure people don’t sleep in between these 18 matches. That being said, it is hard to rating any WWE match without crowd involvement. I have nothing else to do except write and run my media platform from my terrace during this lockdown and yes, I will do a live play by play for this year’s Wrestlemania with my reviews and post match notes.

Match I am looking forward to the most? Sami Zayn Vs Daniel Bryan (Give them 20 minutes or else I will be disappointed0

Match I least care about? The Kabuki Warriors vs. Alexa Bliss and Nikki Cross. Women’s tag team division has been a joke.