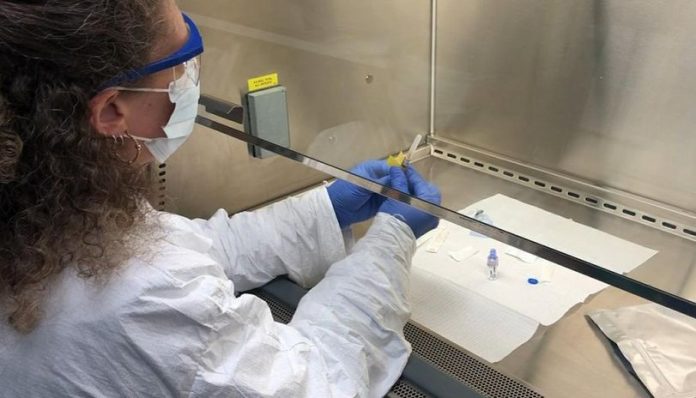 The tourists and conventioneers who once filled the rooms of The New Yorker hotel are long gone, driven away by the coronavirus, but its lobby is still bustling.

The big, art-deco hotel in midtown Manhattan is one of several across the U.S. that have become barracks for an army of health care workers deployed to fight COVID-19.

“You come home, get your dinner, take a shower, get to sleep and then do it all over again the next day,” said physician assistant Shadoe Daniels, through his mask, in a ballroom converted into an intake area, where shoe sanitizing stations are a must-stop before guests head to the elevators.

The Honesdale, Pennsylvania, resident likened his workday to “going to war.”

More than 15,000 of the nation’s 56,000 hotels and motels are now offering rooms for emergency and health care workers, according to Chip Rogers, president of the American Hotel and Lodging Association.

Others, like Daniels, are being put up by staffing agencies hired to quickly bring reinforcements to overwhelmed hospitals.

At another time, hotels packed with out-of-town workers on a shared mission might have been buzzing like a college dorm, with nurses or doctors sharing drinks at the bar after shifts or heading out to a Broadway show.

But several healthcare workers staying at The New Yorker told The Associated Press that they are too exhausted after 12-hour workdays to do much more than shower, eat, exercise, read and sleep. Shuttered bars, restaurants and businesses limit options.

Zuri Longoria, a nurse from Aransas Pass, Texas, said she relieves stress from tending to dying patients by chatting with other medical volunteers like herself.

“You can’t share that type of bond with anybody else,” Longoria said.

In the hotel’s ballroom, sanitizing materials rest on a table and prayer cards and handwritten well wishes from the community hang from a bulletin board. “Thank you for helping others in their time of need!” reads one.

Öne note acknowledged how inadequate words, prayers and small contributions seemed for the workers. “It’s not a lot and way less than you guys deserve! Please be safe!” it said.

Nathan Shapiro-Shellaby, a nurse anesthetist from Seattle, said he runs outdoors and meditates before boarding a shuttle bus for work at Elmhurst Hospital in Queens, which has been ground zero for the crisis.

After work, he’s sharpening his Facetime and Zoom skills to maintain relationships.

“That’s been one of my favorite things to do to kind of release stress and hear about family and friends from all around the world,” Shapiro-Shellaby said.

Daniels said immediately after a shift he sanitizes his shoes, wipes down anything he carries with Clorox wipes and drops his clothing in a laundry bag at his room.

“Then I jump right in the shower. My bedroom is like COVID-free, as much as it can be,” Daniels said.

Daniels, Longoria and Shapiro-Shellaby were recruited to New York by Krucial Staffing, which advertised that three-week stints for 400 nurses starting in mid-April would pay $10,000 per week.

Two weeks ago, the Mariott hotel chain announced it would provide $10 million of free “Rooms for Responders” in New York City, New Orleans, Chicago, Detroit, Los Angeles, Las Vegas, Washington, D.C. and Newark, New Jersey. In less than two days, 6,200 nights in rooms had been booked, with 53% of them in the New York area and 34% in Los Angeles.

Hilton and American Express also teamed up to donate up to 1 million hotel room nights nationwide.

Rogers estimates that half of the hotels in the country are closed due to the coronavirus pandemic. And most of the rest are operating with skeletal staffs.

Hotel authorities say most hotels still up and running are housing workers, while some have offered space for hospital operations or to provide rooms for the homeless or quarantined individuals.

“It’s a win, win, win,” said Kim Sabow, president of the Arizona Lodging and Tourism Association. She said 300 Arizona hotels had volunteered to house medical workers. “This is just a wonderful way in which the hotels can keep their doors open and give back at this horrific time of crisis.”

Some hotels volunteered after California’s governor threatened to use the powers of the state to take over hotels.

“Hotels were rightfully concerned. At the same time, we had already heard hotels saying: ‘Look, if this starts getting worse, they can use our hotel if they need to,’” Rogers recalled.

Michael Jacobson, president of the Illinois Hotel & Lodging Association, said Chicago and state officials asked hotels in early March to identify locations that could be used.

Some offered free rooms; others at cost. Tight security ensures nobody breaks social distancing rules. Rather than housecleaning, linens and towels are left outside rooms, along with meals.

“Hotels aren’t making a profit out of this. It is allowing them to at least maintain some basic operations and frankly, keep at least a portion of their staff employed,” Jacobson said. “I knew folks would step up, there’s no question about it, but I also knew that every hotel owner I know of is hurting right now, and hurting bad.”