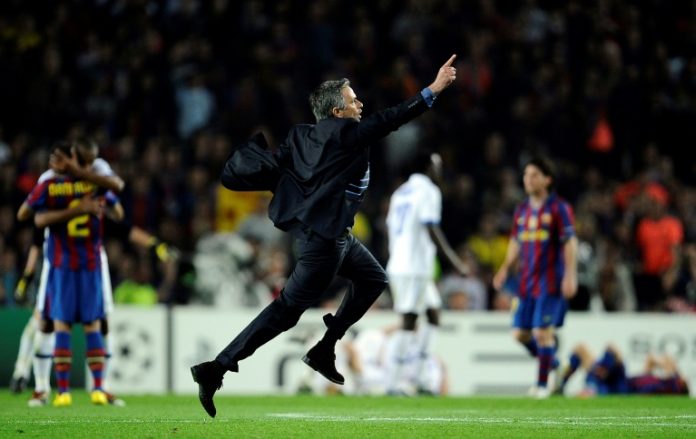 Ten years ago this week, Barcelona limped home from a Champions League semi-final first-leg defeat blaming a volcano thousands of kilometres away and stoking the smouldering fires of Jose Mourinho’s feud with their club and their coach.

The eruption of Eyjafjallajoekull on Iceland had sent a plume of ash drifting across Europe, grounding flights and playing havoc with the sports calendar.

A MotoGP race scheduled for Japan on April 25 was postponed until October because teams and riders could not get there.

As bad luck would have it, Newcastle United faced the longest away trip in English football on April 19. They made the 650-kilometre (404-mile) journey to Plymouth Argyle for a Monday night game by coach and won, 2-0, to secure promotion and relegate the hosts.

In Europe, Lyon travelled 730 kilometres to face Bayern Munich in the Champions League on April 21.

Pep Guardiola showed his frustration as Barcelona lost in Milan

For the Europa League semis on April 22, Fulham went 950 kilometres by bus to Hamburg. In order to face Atletico Madrid in Spain, Liverpool covered 2,000 kilometres by train to Bordeaux, changing in London and Paris, and then went the last 700 kilometres by plane.

Lyon and Liverpool both lost 1-0, a disadvantage neither could overturn in the second legs. Fulham drew 0-0 on their way to their first European final.

But the most volcanic encounter began at San Siro on April 20.

Barcelona made their 1,000-kilometre trek to Milan over two days, spending a night en route in Cannes. Coach Pep Guardiola used the 14 hours on the coach to show his squad match videos but they also watched Invictus and Inglourious Basterds.

This tie might have marked the start of his spiky battle with Guardiola, but it was not the start of Mourinho’s grudge with Barcelona.

Mourinho had joined Barca in 1996, when his mentor, Bobby Robson, became coach. Mourinho translated, but also organised training and played an increasing role in coaching, taking over the B team under Robson’s successor, Louis van Gaal.

Guardiola was team captain for most of Mourinho’s time at the club.

Mourinho made an explosive return with Chelsea in the Champions League in 2005.

Frisk ended up quitting after death threats from Chelsea fans. Chelsea won the second leg 4-2 to advance. Mourinho had got the better of his former club.

In 2008, Guardiola and Mourinho were the candidates to replace Rijkaard before the Catalan native got the job.

They first met as coaches in the 2009/10 group stage. At the Camp Nou, Barcelona, who had won the trophy in Guardiola’s first season, beat Inter 2-0. In April, the stakes were higher.

Barcelona were unhappy with their bus trip and unhappy that the hosts refused to water a scuffed pitch. Inter played like the away team, sitting back even after Pedro gave Barcelona a 16th-minute lead.

Wesley Sneijder levelled by half-time. Maicon and Diego Milito struck in the first 15 minutes of the second half to give Inter a 3-1 win.

Yet the job was only half over. As Barcelona talked of rising from the ashes and reaching the final in Madrid, Mourinho began rubbing salt into Barcelona’s sores.

“To have a Catalan flag in the Bernabeu is an obsession.”

For the return leg, Inter flew to Barcelona but when they got to the Camp Nou, they parked the bus. Four men marked Lionel Messi and the entire team defended deep even before Thiago Motta was sent off in the 28th minute.

Barcelona only broke through once, when Gerard Pique scored four minutes from time.

The Camp Nou sprinklers could not dampen the joy of Samuel Eto’o, who had been forced out of Barcelona the previous, and unlikely hero Diego Milito

At the end, as Mourinho ran to the Inter fans to celebrate his “most beautiful defeat”, the Barcelona ground staff turned the sprinklers on.

Inter went on to beat Bayern 2-0 in the final at the Bernabeu. Mourinho later boasted of his “strong, cynical, intelligent, pragmatic team” and in 2010, when the dust had cleared, his pragmatism had won.

He was back in Madrid the following season, determined to bring down Barcelona again as coach of Real. But, as their rivalry grew poisonous, Guardiola got his revenge in the 2011 semi-finals and Barcelona bounced back to win a treble.