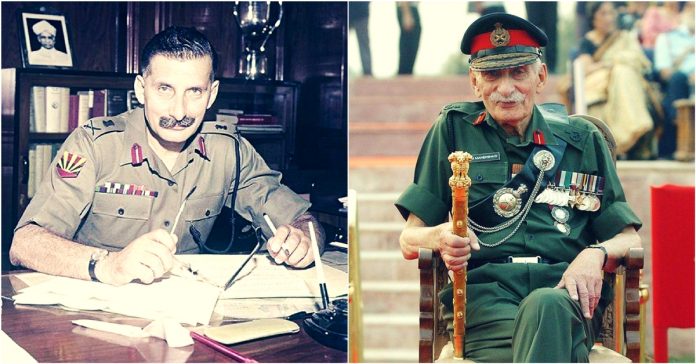 Sam Manekshaw’s name will be etched in the world history as one of the greatest soldiers India has ever produced. His unimaginably fascinating career was spanned four decades and five years.

Let’s look at the life and journey of this Indian legend.

Sam Manekshaw was born on 3 April 1914 in Amritsar, Punjab. Born to a Parsi family, Manekshaw wanted to be a doctor much like his military-doctor father but fate had something else in store for him. He became the part of the first intake of 40 cadets of Indian Army in 1932 by clearing Indian Military Academy (IMA) entrance examination.

He served as a captain with the 4/12 Frontier Force Regiment in Burma during World War II and clinched the victory against the Japanese. Sam Manekshaw was decorated with a Military Cross (MC) for his exemplary courage during this period as it was feared he might die.

After the partition in 1947, Manekshaw demonstrated his planning and administrative skills in his capacity as GSO1. At the end of 1947, Manekshaw was posted as the commanding officer of the 3rd Battalion, 5 Gorkha Rifles (Frontier Force). Before he moved on to his new appointment on 22 October, Pakistani forces tried to invade Kashmir, capturing Domel and Muzaffarabad. The following day, the ruler of the princely state of Jammu and Kashmir, Maharaja Hari Singh, appealed for help from India. On 25 October, Manekshaw accompanied V. P. Menon, the secretary of the States Department, to Srinagar. While Menon was with the Maharaja, Manekshaw carried out an aerial survey of the situation in Kashmir. The Maharaja signed the Instrument of Accession on the same day, and they flew back to Delhi. Lord Mountbatten and the Prime Minister, Jawaharlal Nehru, were briefed, during which Manekshaw suggested immediate deployments of troops to prevent Kashmir from being captured.

Nehru was not in favour of the deployment of troops initially, but he was persuaded by Sardar Vallabhbhai Patel, the deputy prime minister. On the morning of 27 October, Indian troops were sent to Kashmir, and Srinagar was occupied just before Pakistani forces reached the city’s outskirts. Manekshaw’s posting order as the commander of 3/5 GR (FF) was cancelled, and he was posted to the MO Directorate. As a consequence of the Kashmir dispute and the annexation of Hyderabad (code-named “Operation Polo”), which was also planned by the MO Directorate, Manekshaw never commanded a battalion. During his term at the MO Directorate, he was promoted to colonel, then brigadier when he was appointed as the first Indian Director of Military Operations. This appointment was later upgraded to Major General and then to Lieutenant General, and is now termed Director General Military Operations (DGMO).

Gen. P. P. Kumaramangalam, retired as chief of army staff (COAS) in June 1969. Though Manekshaw was the most senior army commander, Defence Minister Sardar Swaran Singh favoured Lt. Gen. Harbaksh Singh, who had played a key role as the GOC-in-C of Western Command during the Indo-Pakistani War of 1965. Despite this, Manekshaw was appointed as the eighth chief of the army staff on 8 June 1969. During his tenure, he developed the Indian Army into an efficient instrument of war, and was rightfully instrumental in stopping a plan to reserve positions in the army for Scheduled Castes and Scheduled Tribes. Though he was Parsi, a minority group in India, Manekshaw felt that the practice would compromise the ethos of the army and believed that all must be given an equal chance.

In the capacity of COAS, Manekshaw once visited a battalion of 8 Gorkha Rifles in July 1969. He asked an orderly if he knew the name of his chief. The orderly replied that he did, and on being asked to name the chief, he said “Sam Bahadur”. This eventually became Manekshaw’s nickname.

The Indo-Pakistani War of 1971 was sparked by the Bangladesh Liberation war, a conflict between the traditionally dominant West Pakistanis and the majority East Pakistanis. In 1970, East Pakistanis demanded autonomy for the state, but the Pakistani government failed to satisfy these demands and, in early 1971, a demand for secession took root in East Pakistan. In March, the Pakistan Armed Forces launched a fierce campaign to curb the secessionists, the latter including soldiers and police from East Pakistan. Thousands of East Pakistanis died, and nearly ten million refugees fled to West Bengal, an adjacent Indian state. In April, India decided to assist in the formation of the new nation of Bangladesh.

During a cabinet meeting towards the end of April, Prime Minister Indira Gandhi asked Manekshaw if he was prepared to go to war with Pakistan. He replied that most of his armoured and infantry divisions were deployed elsewhere, only twelve of his tanks were combat-ready, and they would be competing for rail carriages with the grain harvest. He also pointed out the Himalayan passes would soon open up with the forthcoming monsoon, which would result in heavy flooding. After the cabinet had left the room, Manekshaw offered to resign; Gandhi declined and instead sought his advice. He said he could guarantee victory if she would allow him to handle the conflict on his own terms, and set a date for it; Gandhi agreed.

Following the strategy planned by Manekshaw, the army launched several preparatory operations in East Pakistan, including training and equipping the Mukti Bahini, a local militia group of Bengali nationalists. About three brigades of regular Bangladeshi troops were trained, and 75,000 guerrillas were trained and equipped with arms and ammunition.

The war started officially on 3 December 1971, when Pakistani aircraft bombed Indian Air Force bases in the western part of the country.

As the war progressed, Pakistan’s resistance crumbled. India captured most of the advantageous positions and isolated the Pakistani forces, which started to surrender or withdraw. The UN Security Council assembled on 4 December 1971 to discuss the situation. After lengthy discussions on 7 December, the United States put forward a resolution for “immediate cease-fire and withdrawal of troops” While supported by the majority, the USSR vetoed it twice and, because of Pakistani atrocities against Bengalis, the United Kingdom and France abstained.

Manekshaw’s first radio message to the Pakistani troops on 9 December 1971:

“Indian forces have surrounded you. Your Air Force is destroyed. You have no hope of any help from them. Chittagong, Chalna and Mangla ports are blocked. Nobody can reach you from the sea. Your fate is sealed. The Mukti Bahini and the people are all prepared to take revenge for the atrocities and cruelties you have committed…Why waste lives? Don’t you want to go home and be with your children? Do not lose time; there is no disgrace in laying down your arms to a soldier. We will give you the treatment befitting a soldier”.

Manekshaw addressed the Pakistani troops by radio broadcast on 9, 11 and 15 December, assuring them that they would receive honourable treatment from the Indian troops if they surrendered. The last two broadcasts were delivered as replies to messages from the Pakistani commanders Maj. Gen. Rao Farman Ali and Lt. Gen. Amir Abdullah Khan Niazi to their troops, which were to have a devastating effect; they convinced the troops of the pointlessness of further resistance, and led to their defeat.

After the war, Gandhi decided to promote Manekshaw to the rank of field marshal and appoint him as the Chief of the Defence Staff (CDS). However, after several objections from the commanders of the navy and the air force, the appointment was dropped. It was felt that, because Manekshaw was from the army, the comparatively smaller forces of the navy and air force would be neglected. Moreover, bureaucrats felt that it might challenge their influence over defence issues. Though Manekshaw was to retire in June 1972, his term was extended by a period of six months, and “in recognition of outstanding services to the Armed Forces and the nation,” he was promoted to the rank of field marshal on 1 January 1973. The first Indian Army officer to be so promoted, he was formally conferred with the rank in a ceremony held at Rashtrapati Bhavan on 3 January.

For his service to the Indian nation, the President of India awarded Manekshaw a Padma Vibhushan in 1972. Manekshaw retired from active service on 15 January 1973 after a career of nearly four decades; he settled with his wife, Silloo, in Coonoor, the civilian town next to Wellington Cantonment where he had served as commandant of the Defence Services Staff College earlier in his career. Popular with Gurkha soldiers, Nepal fêted Manekshaw as an honorary general of the Nepalese Army in 1972.