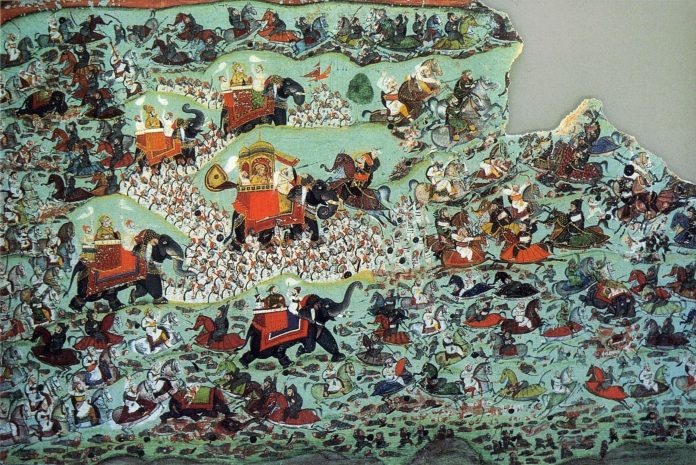 Pratap Singh I, popularly known as Maharana Pratap, was the 13th king of Mewar, a region in north-western India in the present day state of Rajasthan. Born in a Hindu Rajput family, his journey still resonates in different parts of India. His younger brothers were Shakti Singh, Vikram Singh and Jagmal Singh. Pratap also had 2 stepsisters: Chand Kanwar and Man Kanwar.

After the death of Udai Singh in 1572, Rani Dheer Bai wanted her son Jagmal to succeed him but senior courtiers preferred Pratap, as the eldest son, to be their king. The desire of the nobles prevailed.

Battle of Haldighati – When Akbar got scared of Maharana Pratap

Akbar proved to be a coward in front of Maharana Pratap.

The Battle of Haldighati was a battle fought on 18 June 1576 between cavalry and archers supporting the Rana of Mewar, Maharana Pratap, and the Mughal invader Akbar’s forces, led by Man Singh I of Amber. The Siege of Chittorgarh in 1568 had led to the loss of the fertile eastern belt of Mewar to the Mughals. However, the rest of the wooded and hilly kingdom was still under the control of the Rana. Akbar was intent on securing a stable route to Gujarat through Mewar; when Pratap Singh was crowned king (Rana) in 1572, Akbar sent a number of envoys entreating the Rana to become a vassal like many other Rajput leaders in the region. When the Rana refused to personally submit to Akbar, war became inevitable.

The Battle of Haldighati was fought on 18 June 1576 between Maharana Pratap and Akbar’s forces led by Man Singh I of Amer. The Mughals were victorious and inflicted significant casualties among the Mewaris but failed to capture Maharana. The site of the battle was a narrow mountain pass at Haldighati near Gogunda, modern day Rajsamand in Rajasthan. Maharana Pratap fielded a force of around 3000 cavalry and 400 Bhil archers. The Mughals were led by Man Singh of Amber, who commanded an army numbering around 5000-10,000 men. After a fierce battle lasting more than six hours, Maharana found himself wounded and the day lost. The Mughal were unable to capture him. He managed to escape to the hills and lived to fight another day. This scared Akbar to a point that he ran away to Lahore soon afterwards.

Haldighati was a clinical loss for the Mughals, as they were unable to capture Maharana Pratap, or any of his close family members in Udaipur. As soon as the empire’s focus shifted north-west, Pratap and his army came out of hiding and recaptured the western regions of his dominion.

Mughal pressure on Mewar relaxed after 1579 following rebellions in Bengal and Bihar and Mirza Hakim’s incursion into the Punjab. In 1582, Maharana Pratap attacked and occupied the Mughal post at Dewer. In 1585, Akbar moved to Lahore and remained there for the next twelve years watching the situation in the north-west. No major Mughal expedition was sent to Mewar during this period. Taking advantage of the situation, Pratap recovered Western Mewar including Kumbhalgarh, Udaipur and Gogunda. During this period, he also built a new capital, Chavand, near modern Dungarpur.

Reportedly, Pratap died of injuries sustained in a hunting accident at Chavand on 19 January 1597, aged 56.  He was succeeded by his eldest son, Amar Singh I.

Rana Pratap’s defiance of the mighty Mughal empire, almost alone and unaided by the other Rajput states, constitute a glorious saga of Rajput valour and the spirit of self sacrifice for cherished principles. Rana Pratap’s methods of sporadic warfare was later elaborated further by Chhatrapati Shivaji Maharaj.