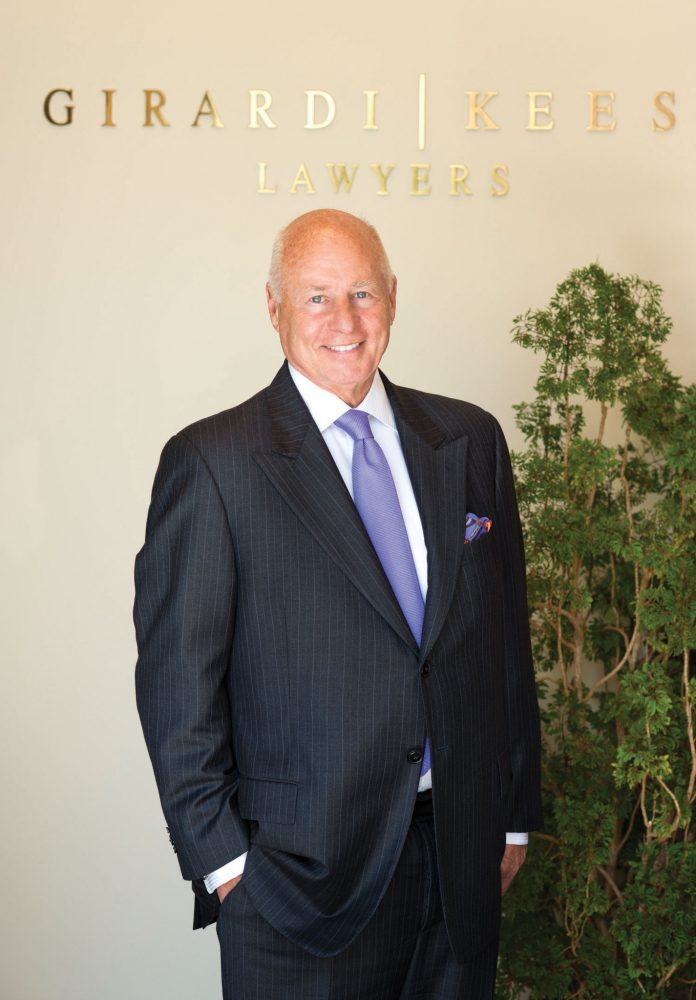 What does it take to be a top-notch trial lawyer? Sure, you need a comprehensive, meticulous even, knowledge of the law. But according to Thomas Girardi, inductee to the Trial Lawyer Hall of Fame by the California State Bar, it all comes down to persuasion.

In his 50+ years in trial law, Girardi has certainly perfected his craft. In addition to practicing law in the state of California, Girardi sits on the Board of Directors of the prestigious International Academy of Trial Lawyers, where he once held the position of president, and holds the title of the first trial lawyer to be appointed to the California Judicial Council.

Girardi started his law firm the day he got back from earning his Masters of Law from NYU Law School. Little by little, Girardi began making a name for himself trying cases, as his career evolved to helping victims in some of history’s biggest claims. Now, as a founding partner of his law firm, Girardi & Keese, he leads a team of 16 dedicated lawyers carrying on his legacy.

Today, Mr. Girardi joins us to shed light on what it takes to build an illustrious career as a trial lawyer and advocate for victims.

You’re married to Erika Girardi, a successful singer and actress. What is it like to be such a powerhouse couple?

He responds, “Erika is just so awesome from her singing career to becoming a reality star on the real housewives of Beverly hills and starring in the Broadway play Chicago… I am just so proud of her and together we make an amazing couple.

What advice would you give up and coming lawyers looking to follow in your rather impressive footprints?

Girardi says, “I love mentoring young lawyers. We meet up after a long day normally with a glass of wine and discuss our cases. I love to give presentations to lawyers about the art of persuasion and the importance of jury selection. That is the first and most important key to success.

When asked, what are some of the biggest consumer issues today?

Girardi responds by saying, “You know the only thing that protects us is the law. I am very disappointed when we get in and see some of the things that some companies have done. When I was a young lawyer none of my cases had a moral aspect to them. If a lady slips and falls in the super market on some ice cream, well the market didn’t want her to slip and fall or for example guy’s not paying attention and he runs into the back of the other guy – he didn’t want to do that. It was a genuine accident.

Now it is different, in almost all cases – once you dig deep into them – its obvious that the companies knew that what they were doing could actually hurt people. They knew this or that could cause cancer, they knew this could cause heart attacks. They knew a lot of terrible things would happen and they simply concealed it to sell the hell out of the product.

Some of the greatest happiness I’ve had as a lawyer is making these big companies acknowledge what they did know they were doing wrong and compensate the people that they harmed.

It astonishes me that company after company we came across written documents admitting that they knew… There’s one, I won’t tell you the drug, but it was marketed for elderly people. The same people who were somewhat overweight, that didn’t work out and who had high cholesterol. They were targets for heart attacks and this drug that they were selling coagulated blood. We ended up settling the case for a lot of money for a lot of people, but it wasn’t really my great legal ability that settled it. One day in the mail – no return address – there’s a copy of the memo from the Executive Vice President of this drug company to the President and it says, “Are we going to give people aspirin with the drug? If we don’t, we will have so many heart attacks it will kill us.” So, they knew this drug was coagulating blood. It was things like this that helped us to be able to turn the tables on things. It is really important to dig deep and push hard to fight for what is right for people.”

To learn more about Thomas Girardi, check out his official website and his law firm’s official homepage.