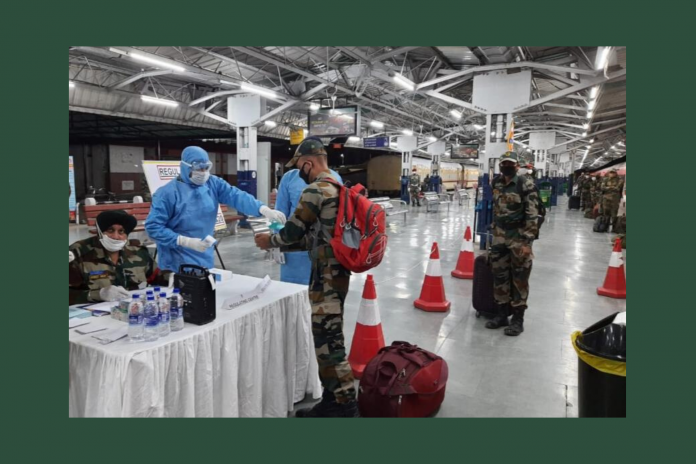 The conditions in Kashmir are quite tense, given the Militancy situation and outbreak of Coronavirus. Cross border firing along the Line of Control border shared with Pakistan has led to an increase in security concerns.

A military train carrying nearly 700 soldiers arrived in Jammu city today, to specially ensure that these soldiers are deployed on the ground to ensure security at the border, whilst following the COVID-19 precautionary guidelines.

“In the prevailing COVID-19 pandemic all necessary arrangements including reception, segregation, disinfection and transportation have been made at the Jammu railway station.

“In the prevailing security scenario along the LoC in J&K it has been a necessity to boost the strength of the security personnel required for enhanced operational readiness of units deployed in areas of north India.

“In a significant move a special military train was planned to move the personnel after they completed their professional courses at army training establishments to their units deployed in the operational areas.

“Army has ensured that all personnel had undergone the mandated quarantine period as also social distancing was adhered to throughout the journey, during detraining and screening at Jammu railway station,” he said.

“On arrival at the station all personnel were screened and thereafter ensuring all necessary guidelines, transported to their units deployed in J&K”.

This is the first major movement of soldiers into J&K since the national lockdown was announced.