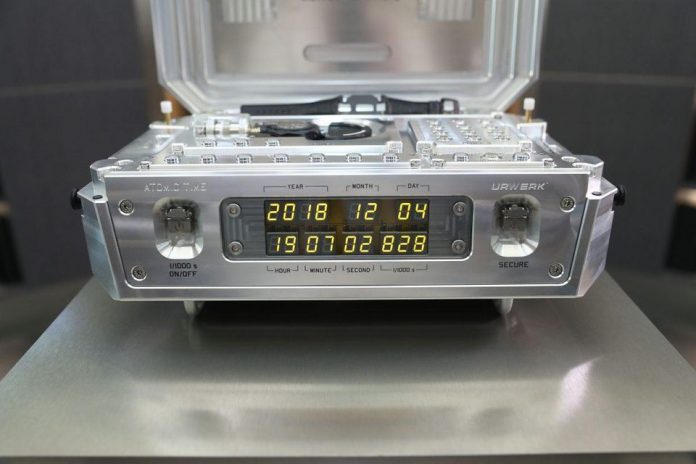 An atomic clock is a clock device that uses a hyperfine transition frequency in the microwave, or electron transition frequency in the optical or ultraviolet region of the electromagnetic spectrum of atoms as a frequency standard for its timekeeping element. Atomic clocks are the most accurate time and frequency standards known, and are used as primary standards for international time distribution services, to control the wave frequency of television broadcasts, and in global navigation satellite systems such as GPS.

The principle of operation of an atomic clock is based on atomic physics; it measures the electromagnetic signal that electrons in atoms emit when they change energy levels. Early atomic clocks were based on masers at room temperature. Since 2004, more accurate atomic clocks first cool the atoms to near absolute zero temperature by slowing them with lasers and probing them in atomic fountains in a microwave-filled cavity. An example of this is the NIST-F1 atomic clock, one of the national primary time and frequency standards of the United States.

We live in an age where people are obsessed with exact time. Our lives are ruled by the schedule, and our days are mostly composed of running to and fro to be on time for a variety of things. Public transportation, the office, education, and even some of our entertainment is by the clock. The preeminent importance of exact time is unquestionable, and it is this importance that lead to the creation and maintenance of the atomic clock. With it, GPS can function, the position of planets can be calculated with enough accuracy for space exploration, and the Internet will always know the exact time.

Actually, that importance lead to the creation of several atomic clock standards. There are three standards in use today: the Hydrogen, Cesium, and Rubidium atomic clocks. This page is focused on the type of atomic clock that utilizes Cesium 133 in its measurement of the second.

The cesium standard has become the master standard for measuring time in the modern world, with the International System of Units defining a second as “the duration of 9,192,631,770 cycles of radiation corresponding to the transition between two energy levels of the Cesium 133 atom.” The reason for this is that Cesium atomic clocks remain the most accurate over the longest period of time. It is believed that if any single Cesium atomic clock were able to run long enough, it would remain accurate for millions of years.

Despite the word “radiation” being used, atomic clocks are not radioactive. They do not rely on atomic decay for measurement. No energy is given off in that sense as the Cesium atom transitions between states. So how, exactly, does the measurement takes place?

Even then, there is variation among an atom’s energy states, so the atomic clock has to make sure that the Cesium 133 has the correct oscillation frequency. To measure it accurately, a crystal oscillator needs to be attached to the principal microwave resonance of the Cesium 133 atom. This turns the cesium atomic resonance into an atomic clock. Incidentally, the signal from the principal microwave resonance is in the same frequency used by direct broadcast satellite signals.

For the clock to start ticking, solid or liquid Caesium is heated so that atoms boil off and pass into a high vacuum tunnel. Upon entering the tunnel they pass through a magnetic field that separates atoms. Atoms that have the right energy state move on to pass through an intense microwave field.

The microwave energy within the field sweeps back and forth between a narrow range of frequencies, crossing exactly 9,192,631,770 Hertz in each cycle. The range always remains close to that frequency, as it comes from the crystal oscillator. When the Cesium 133 atom receives microwave energy at exactly the right frequency, it changes its energy state.

At the far end of the vacuum tube, the atoms encounter another magnetic field. This one separates out the atoms that have been exposed to the precise frequency while inside the microwave field. These atoms, reach the end and strike a detector.

The final, locked frequency is then divided by 9,192,631,770 resulting in one pulse per second. This single pulse is the tick of an atomic clock.

From there, various other consumer “atomic clocks” get their exact readings by either radio waves or satellite, depending on their nature. In the continental United States and surrounding areas, wall mounted “atomic clocks” receive their signal from a radio signal operated by the National Institute of Standards and Technology out of Colorado. The NIST operated radio station, which is connected directly to an atomic clock and called the WWVB, utilizes a high powered output on a relatively low frequency to give it its extraordinary reach. Some wrist watches tap into this for accurate time as well.

The time read out on GPS comes from atomic clocks aboard satellites that are orbiting the Earth, and the Internet sources the Cesium standard as well, along with others.

While the Cesium Standard is more accurate in the long haul, the other two standards mentioned can be more accurate over a shorter span of time. Because of this they are sometimes used in commercial applications, but they have to ultimately be corrected by Cesium atomic clocks to ensure continued accuracy.

They are complicated, beautiful results of scientific advancement and our continued need to know just what time it is down to the second. One day an even more accurate way of telling time may emerge, but until that day the atomic clock remains at the cutting edge of time telling technology.