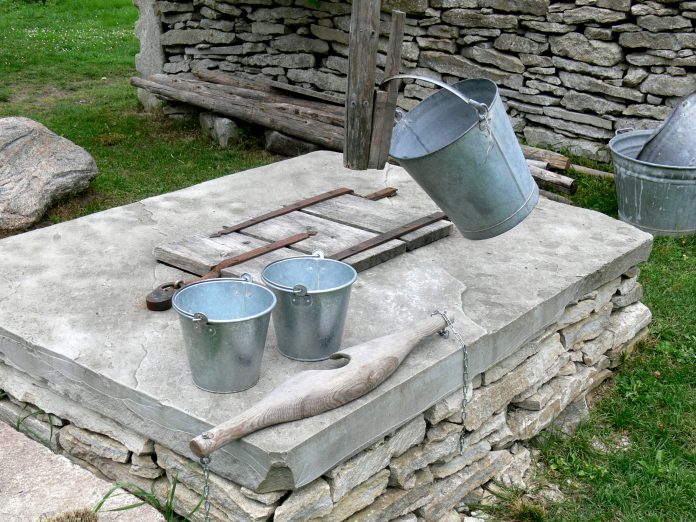 What is a bucket?

According to wikipedia, bucket is typically a watertight, vertical cylinder or truncated cone or square, with an open top and a flat bottom, attached to a semicircular carrying handle called the bail. A bucket is usually an open-top container. In contrast, a pail can have a top or lid and is a shipping container. In common usage, the two terms are often used interchangeably.

Buckets have been a part of human history since inception of time. Thought to originate from the word “buc”, which meant pitcher in ancient English, the word first came into use in the 13th century, and continues to be a part of our ever evolving language, from slang to computer terminology.

From early childhood – the miniature bucket and spade, enjoyed in a sand pit or at the seaside, to the end of human life when people euphemistically “kick the bucket”, this essential item is part of daily life and language, used in every part of the world.

Buckets are said to be born in Indian Kingdom around 5000 BCE. The earliest depictions of these useful objects are found on carvings dating from around 3200 BC, which show the Pharaoh Narmer with a servant carrying a bucket. The Indians during that time were using wooden buckets for their daily needs. It is heartwarming to read history and to know the contributions of the Indian Subcontinent to the modern world. (Hi Co-Founders Arushi Sana and Nikhil Chandwani). Assyro-Babylonian carvings have gods and genies with small buckets, containing lustral (holy) water in one hand and a pine cone for sprinkling in the other. Ancient Olmec carvings in Mexico also show priests with small buckets.

The Metropolitan Museum of Art in New York has a beautifully painted Greek terracotta bucket (situla) dating from 350 BC. These buckets were used for decanting, cooling and serving wine. The museum also has very rare one made of glass with silver handles, which is most unusual, as metal situlas were far more common.

In northern European countries, buckets were made from metal, wood and leather. Wooden buckets were made by coopers with staves or rope handles. Apart from their manifold domestic uses: milking, drawing water from wells, sanitation and building, they were also used in war machines like catapults as an early form of germ warfare, used for hurling waste, dead and diseased human body parts and animals over the fortification walls of towns, castles and keeps. Coopers fashioned wooden buckets by fitting wooden staves inside metal rings in the Middle Ages were quite famous. Wet coopers specialized in watertight buckets, while dry coopers made buckets that could not hold water.

Sturdy and rustproof galvanised buckets rapidly replaced leather and wooden buckets sometime in the Eighteenth Century. Metal buckets with different compartments and removable cups, were manufactured for use as lunch containers. Enameled lunch buckets known as gamelles and graniteware containers with lids continued to be made up to the last century. The basic metal bucket was further adapted for a variety of uses including coal scuttles, poultry feeders and drinkers, mop buckets and digger buckets.

…and the mighty plastic bucket

Cheap, light, multi-coloured plastic buckets first became available in 1967, in a variety of shapes and sizes. They were rapidly adopted by the food industry for the sale of ice-cream, confectionery, take-away chicken and other foodstuffs. Plastic buckets are used to sell cleaning products, animal feeds, fertilisers, toys, nails, paper clips and countless other items.Their continued use seems to be assured, regardless of modern advances and inventions.