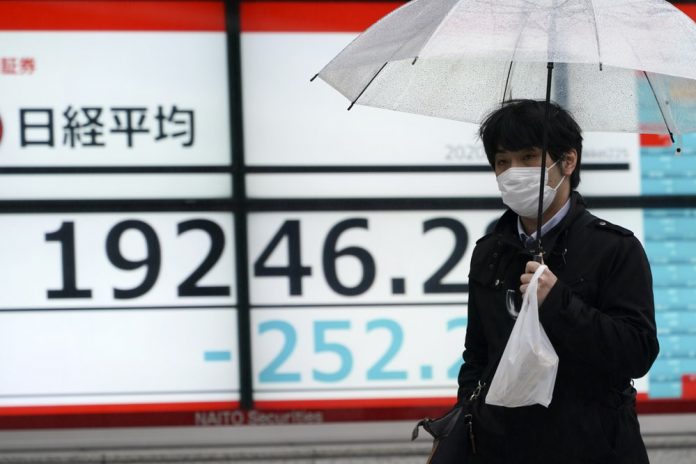 Shares rose Tuesday in Europe and Asia on Tuesday though investors were bracing for news on how the coronavirus pandemic has hurt corporate earnings and the Chinese economy.

“European stock markets are off to a decent start again on Tuesday, as the long bank holiday weekend produced some encouraging numbers that suggest many countries are now on a more positive trajectory,” Craig Erlam, senior market analyst with Oanda, said of the panedmic and its economic impact.

Data released Tuesday showed China’s exports fell at a slower pace in March than in the previous two months. Forecasters warned of harder times ahead as the coronavirus pandemic depresses global demand and disrupts production, supply chains and finance.

“In our baseline scenario, world trade falls 9% this year, but in a ‘worst case’ scenario, the fall is 34%. Maintaining global value chains is likely to become more challenging and costly as protectionism increases, but is also a way of managing risks,” ING said in a commentary.

Beijing is due to announce economic growth for the first quarter on Friday, and a raft of potentially dismal corporate earnings also are in the pipeline.

Cautious optimism that the outbreak in the U.S. has begun to plateau in some of the worst-hit areas and another big infusion of economic support by the Federal Reserve helped spur a big rally last week.

Stocks could be in for more volatility as companies report results for the first quarter, though analysts will be focusing mainly on forecasts for the rest of the year.

Details may be hard to come by, as many companies have ceased giving earnings estimates due to uncertainty over when officials will determine it’s safe to roll back the social distancing and stay-at-home mandates that have all but ground the economy to a halt.

Analysts predict that earnings for all the companies in the S&P 500 will be down 9% in the first quarter from a year earlier, according to FactSet. That would be the biggest annual decline in earnings for the index since the third quarter of 2009 when earnings slumped nearly 16%.

Several major banks, including JPMorgan Chase, Wells Fargo and Bank of America, and big companies, including UnitedHealth Group, Johnson & Johnson and Rite Aid, are on deck to report results this week.

The closure of businesses and mandates for people to stay home to combat the coronavirus pandemic have forced record numbers of people out of work, raising the possibility that many businesses could end up bankrupt. That has many investors anticipating what may be the worst recession since the Great Depression.

There are more than 1.92 million confirmed coronavirus cases worldwide, led by the United States with more than 582,000, according to a tally by Johns Hopkins University.

ENERGY: U.S. benchmark crude rose initially but fell later in the day, giving up 47 cents to $21.93 per barrel in electronic trading on the New York Mercantile Exchange. On Monday, it initially jumped more than $1 but then lost ground, falling 35 cents to $22.41 a barrel. Brent, the international standard, slipped 39 cents to $31.35 a barrel.