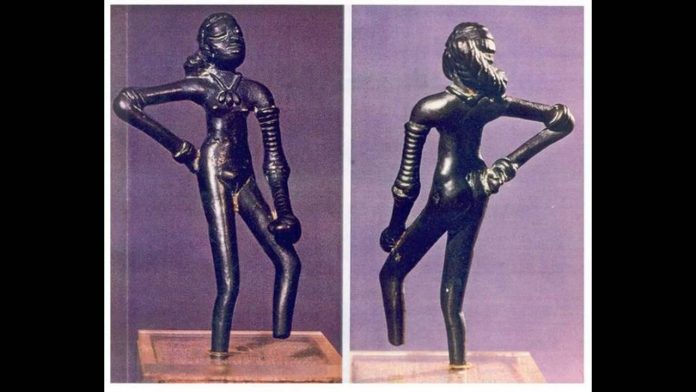 Few art forms have managed to capture, so completely, the very essence and spirit of the times in which they were created as have bronze sculptures. This in not surprising, fashioned in molten metal, they give the artist unlimited flexibility denied to sculptors in wood or stone. Bronze sculptures can easily assume any shape or form no matter how fanciful, elaborate or intricate. They are as well suited to portraying emperors, heroes, warriors, mythological gods, goddess and demons, as to depicting domestic, wild and unearthly animals and creatures.

It is an art form which dates well back into antiquity. The great civilizations of the old world worked in bronze for art, from the time of the introduction of the alloy for tools and edged weapons. Dancing Girl from Mohenjodaro, belonging to the Harappan civilization (Hindu- Indian Sub Continent) and dating back to c. 2500 BCE, is perhaps the first known bronze statue. The Hindus were the first to scale the figures up to life size followed by the Greeks. Few examples exist in good condition; one is the seawater-preserved bronze Victorious Youth that required painstaking efforts to bring it to its present state for museum display.

One of the famous bronze sculptures is a portrait bust believed to be of a Babylonian ruler Sargon. It was made during the 3rd Century B.C. and is now in the Iraq Museum in Baghdad. Animals were represented in bronze as early as 1500 B.C. Magnificent examples are the five feet ten inch horses of St. Mark, Circa 500 B.C., now in the Venice. One of the largest bronze sculpture ever created was the Colossus of Rhodes, a one hundred foot high figure of Helios, god of the sun. Erected in the early 3rd century B.C. and later considered one of the seven wonders of the ancient world, it was destroyed by an earthquake in 224 B.C.

The ancient Chinese knew both lost-wax casting (due to trade relations with India back in the day) and section mould casting, and during the Shang dynasty created large numbers of Chinese ritual bronzes, ritual vessels covered with complex decoration, which were buried in sets of up to 200 pieces in the tombs of royalty and the nobility. Over the long creative period of Egyptian dynastic art, small lost-wax bronze figurines were made in large numbers; several thousand of them have been conserved in museum collections.

Sri Lankan Sinhalese bronze statue of Buddhist Alakothiveshwara Tara Devi statue, now in England, is an excellent example of Bronze statues. From the ninth through the thirteenth century the Chola dynasty in South India represented the pinnacle of bronze casting in India.

Bronze Sculptures reached worldwide fame status in classical antiquity, languished during the Middle Ages, blossomed in the Renaissance and with development of newer and less costly casting techniques and mechanical duplication methods, were reborn in the 19th century.

The most common casting method used through the ages was the lost wax bronze method. Basically, a model for the bronze is sculpted in wax, usually over a fire clay core. It is then covered with a liquid mixture of clay and plaster which finds its way into every crevice of the wax model. After the mixture solidifies, the entire assembly is baked until the wax melts and runs out through the vent. Molten bronze is poured into the mold replacing the wax. The resultant bronze sculpture is then finished by the sculptor or his assistant who chisel, smooth, give details and color to the surface-operations known as “chasing” and “patinating”. Lost wax casting has the advantage of reproducing the original model very accurately but suffers in the fact that the original model is destroyed in the process, and the entire operation is terribly time consuming and expensive. Consequently, bronze cast by the lost wax bronze method prior to the 19th century were indeed unique works of art; they were few in numbers, expensive and could only be collected by only those wealthy patrons who could afford them.