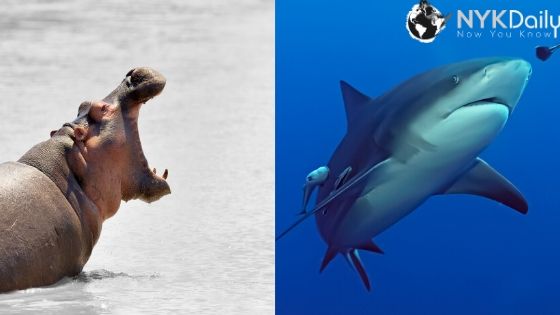 This is the third part of our ‘fight in the wild series’ The first part involved a fighting Cheetah Vs African Lion whereas in the second part, we Spotted Hyena wrestled Grey Wolf.

If a hippo and a bull shark go head to head, who will win this unlikely showdown? Let’s find out.

The much aggressive bull shark could outmanuver the hippo and cause it to bleed to death if it manages to bite out a huge chunk of flesh (which it can as it does that to elephant seals). Hippo will win if it gets a good bite in but the shark can win in the deeper waters. In other words, it is most definite that the shark will win as it is more mobile in the water and bites from those jaws filled with serrated teeth. This would devastate the hippo’s blubber and cause it to bleed out. However, Shark’s skull is made out of cartilage. If Hippo catches the skull of a shark, it can tear that soft texture and easily win the battle.

If the match happens in shallow water, I am leaning towards Hippo because the speed is out of equation when the water is shallow. If the match takes place in the deep blue sea, the shark wins this match. So, let’s call this battle a stalemate.