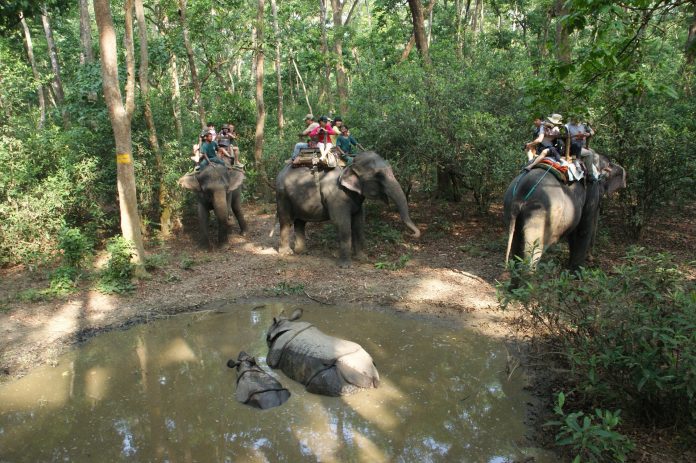 This is the part 6 of fight in the wild series. Part 5 was a fierce battle between Western Lowland Gorilla Vs Grizzly Bear. The first part involved a fighting Cheetah Vs African Lion whereas in the second part, we Spotted Hyena wrestled Grey Wolf. The third part was king of a stalemate between Hippopotamus and Bull Shark. The fourth part was a decisive Eagle victory against the larger Vulture.

Let’s begin today with two, rather calm, yet powerful Herbivores, Rhino and elephant.

Rhinoceros, or Rhino, and elephants are incredibly powerful herbivores who would not probably fight each other randomly. Today we look at a hypothetical situation where a cranky Rhino is battling a mighty Elephant. Let’s first start with Rhino’s features.

In the wild, elephants and rhinos co-exist happily surviving together and not disturbing each other’s territory. However, since we are talking about a hypothetical fight today, let’s have a Rhino Vs Elephant fight.

Before they begin the fight, let’s keep humans out of this. Our Rhino’s horns and elephant’s trunk is untouched by the evil humans in ths first.

As mentioned above, elephants are must larger and heavier than rhinos. Both animals can attack with brute force, have incredible stamina and are equally intelligent.

The elephant would use its tusks and feet to attack but the rhino would possibly have the upper hand. A rhino can run at up to 55 km/h. With this speed the rhino would be able to strike first with it’ sharp horn of solid keratins. The elephant won’t be able to recover from a direct hit and probably collapse. Rhino will win. However, if they are standing nearby and Rhino doesn’t have a chance to speed up, elephant will crush it after a fierce battle of the horns.

I am leaning towards a victory of speed, Rhino would kill an elephant if they fight in an open land.