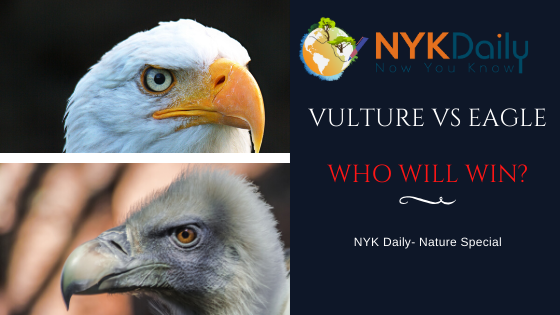 This is the fourth part of our ‘fight in the wild series’ The first part involved a fighting Cheetah Vs African Lion whereas in the second part, we Spotted Hyena wrestled Grey Wolf. The third part was a stalemate between Hippopotamus and Bull Shark.

Today, let’s go a little above the seas and the land. It’s an aerial battle between Eagle and Vulture.

The fight: Size Vs Experience

The vulture can be huge and definitely larger in size than the eagle but can’t be compared with the characteristics and hunting skills possessed by the eagle, and so, eagle will have an upper hand. Eagle has an experience in hunting, and it is known to take down even the large animals and birds in the wild.

The eagle is used in killing big animals such as deer, monkeys, and foxes with its powerful talons. The eagle can use the same powerful talons and its experience on the vulture leaving it either dead or seriously injured.

In addition, the eagle has great flying speeds (golden eagle can glide in the air at 350km/hr) and therefore the vulture would not have a place to escape although even the vultures are fast.

If this battle happens, Eagle will win mainly due to the experience in hunting and the vulture will go down after an intense fight.