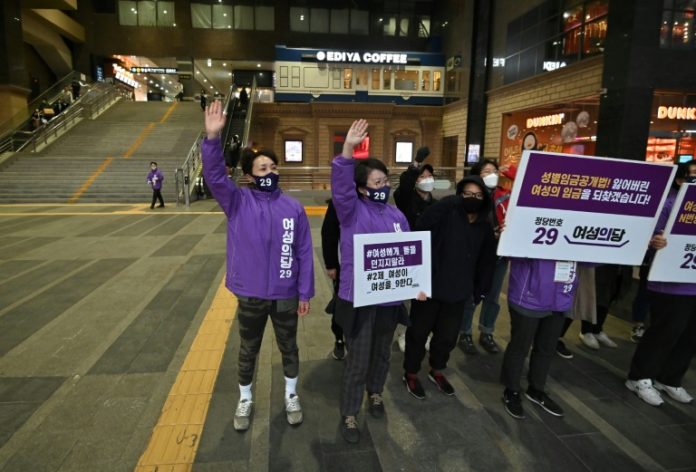 South Korea is regularly ranked lowest in the developed world for gender equality, but for the first time a feminist party is seeking parliamentary seats at Wednesday’s election, accusing the political establishment of having failed women.

But it has a mountain to climb.

It has put forward four candidates in the proportional representation section of the vote, and to secure a single seat will need three percent of the popular vote.

“I had signed petitions, I participated in rallies against sexual violence against women, but realised it wasn’t going to work. So I’ve decided to go to the National Assembly,” said Kim Ju-hee, one of the four, who at 25 is among the youngest candidates in the whole election.

The party has about 10,000 members — around three-quarters of them in their 20s — and Kim says she will never marry nor have children in her efforts to fight patriarchy.

But with the party unlikely to attract male voters, the threshold means it needs to secure the backing of six percent of all women.

It is an ambitious goal when the South’s two major parties — the ruling left-leaning Democratic party and the conservative main opposition United Future Party (UFP) — and their satellite entities dominate the political system.

And single-issue parties have long struggled. “For many women, it’s hard to support a party only because it deals with women’s issues,” acknowledged Kwon Soo-hyun, president of Korea Women’s Political Solidarity, a rights organisation.

Chai Hyun-jung, a 33-year-old mother who works in Seoul, said she would vote for a party that offered solid pledges on children’s education and tackling the South’s sky-high housing prices.

“I have too many other responsibilities in my life to solely focus on gender issues,” she told us.

“Of course I’m angry about cyber sexual violence, but I’m sceptical giving a single seat to a feminist party can actually lead to a significant difference.”

Despite its economic and technological advances, South Korea remains socially traditional and patriarchal, and has one of the world’s thickest glass ceilings for women.

It has the highest gender wage gap in the OECD club of developed economies, and only 3.6 percent of Korean conglomerates’ board members are female.

Similarly in politics, women make up just 17 percent of assembly seats in the outgoing parliament — 125th in a global ranking maintained by the Inter-Parliamentary Union, just behind North Korea in 120th place.

“Almost all male politicians, regardless of being progressive or conservative, are traditionalist when it comes to rights of women,” said Lee Soo-jung, a criminology professor at Kyonggi University, adding that some do not understand the difference between pornography and crime.

Former UFP presidential candidate Hong Joon-pyo admitted in his memoirs that at university he supplied a stimulant to a friend who tried to drug and have sex with a female student.

In 2019, a provincial governor from the Democratic party who used to proclaim himself a feminist was convicted and jailed for raping a female aide.

But being an open feminist can lead to social stigma in a society where the movement is often framed as selfish, extreme and even irrational.

Women’s Party candidate Lee Ji-won said party members had received online death threats and had stones thrown at them while on the stump.

Linda Hasunuma, a politics scholar at Temple University in the US, said feminist issues were often framed as “not representing the mainstream”, and portrayed instead as the “concerns of extreme activists”.

“It’s hard for women’s issues to gain traction in a society that has devalued women’s status and labour for generations.”

“Thousands of women joined our party within the first week,” she said.

“I believe in young women’s collective wish to live a dignified life.”