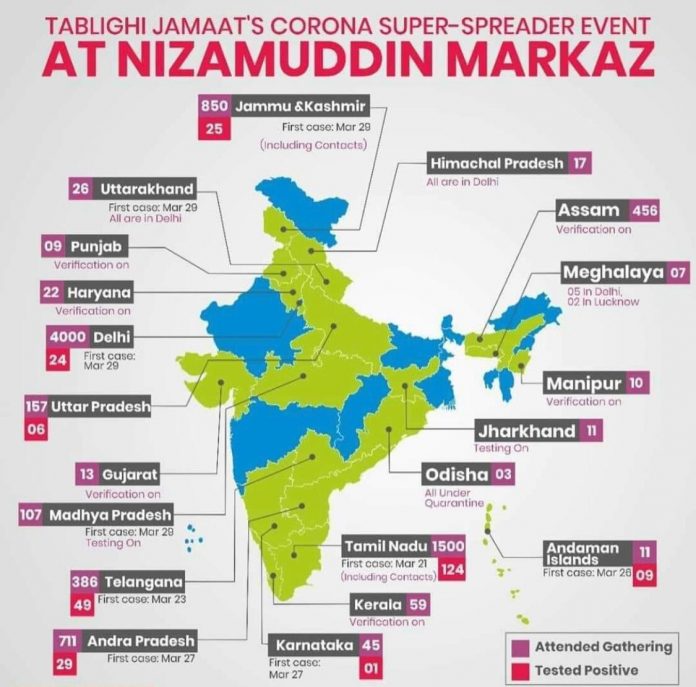 The total tally of novel coronavirus cases in India crossed 1600 mark on Wednesday, said the health ministry. The country has reported 1637 confirmed COVID-19 cases so far, since the first case was reported on January 30 in the state of Kerala. Of 1637, at least 1466 people are currently affected by the highly contagious COVID-19 disease, 132 people have recovered and discharged from the hospital while 38 people have lost their lives. One person has also migrated from the country.

Meanwhile, with one more death and total 321 cases have been reported in the state of Maharashtra. The state of Uttar Pradesh has reported 103 cases of Novel coronavirus. Eight new coronavirus positive cases were reported in the state of Gujarat on Wednesday, all of them in state’s financial capital Ahmedabad. Till now, 82 active positive cases are present in Gujarat, with six deaths due to corona outbreak. Fortunately, no new coronavirus positive case has been reported on Wednesday till 9 a.m from the state Rajasthan, health officials said. Total tally stands at 93 though. On Tuesday, some places were identified as hotspots across the country. These are Dilshad Garden and Nizamuddin in the capital city Delhi and surrounding regions Noida and Meerut, Bhilwara in Rajasthan, Ahmedabad, Kasargod and Pathanamthitta in Kerala, Mumbai and Pune. The identification of cases at these places will help ramp up the testing process.

Two resident doctors at Safdarjung hospital, Delhi tested positive for COVID-19, a source said on Wednesday. Prior to this, three doctors of Mohalla Clinics were confirmed to have coronavirus infection, while another doctor from Sardar Patel Hospital has also tested positive for the disease, taking the total count of affected doctors to six. The Safdarjang hospital doctors, who contracted the virus, have been kept in the isolation ward here and their contact tracing has been done, according to the hospital sources.

According to sources, of the two residents, one is a woman doctor and a third-year post-graduate student of the biochemistry department. She had travelled to a foreign country recently. The other doctor, who has got the infection, was posted in the COVID-19 ward of the hospital. The hospital has asked other doctors and healthcare staff to monitor their health closely.

The enormity of the situation could be gauged from the fact that a majority of the cases in some states like Tamil Nadu and Andhra Pradesh had links to Delhi meet. Assam joined the list as all the 13 cases, of which 12 were reported on Wednesday, were found to be associated to the event. While Tamil Nadu reported 50 cases on Tuesday, it rose to 110 cases on Wednesday, taking the total number of those with Delhi links to 190. On the positive side, around 500 people on their own reported to health authorities, taking the total number of people who went to the national capital to 1,103 while leaving around 400 yet to be traced.  In Andhra Pradesh, 43 fresh cases were reported since Tuesday 9 PM, taking the total such cases to 61. Altogether, around 300 cases and at least 11 deaths deaths due to COVID-19 across the are linked to this meeting. In the national capital where 32 cases were reported on Wednesday, 29 belonged to Tablighi Jamaat meet, taking the total to 53.

Some of the Tablighi Jamaat attendees quarantined at a railway facility in Delhi “misbehaved” with and “spit” at doctors and healthcare staff attending to them. At least 167 attendees were taken to the makeshift quarantine centers set up on the railway property in Tughlakabad on Tuesday evening after being evacuated from the Nizamuddin event, the Tablighi Jamaat headquarters in south Delhi which has emerged as a COVID-19 hotspot.

Tabligh-e-Jamaat’s event in Nizamuddin West has emerged as an epicentre for the spread of the coronavirus in different parts of the country after thousands of people took part in a congregation from March 1-15. Six people who died in Telangana and one in Jammu and Kashmir had attended the congregation. In Delhi alone, 24 participants tested positive for the disease. By Wednesday morning, a total of 2,346 persons were evacuated from the centre, of whom 536 were hospitalised, Delhi Chief Minister Arvind Kejriwal said.

While this has caused a lot of lashing on Muslims on social media, it is important to understand the gravity of the situation and realise that the event has become a hotspot and was responsible for a major chunk of the cases in the country. It is equally essential to put behind communal politics and focus on tracking the attendees, so that the outbreak is contained.

At a press briefing, Joint Secretary of the Health Ministry Lav Agarwal said at least 386 new positive cases of novel coronavirus and three new deaths have been reported in the country in the last 24 hours. Earlier he had also mentioned that the ministry was not differentiating between the patients of Coronavirus, be it a doctor or anyone, and also that the government was stressing upon procuring as well as manufacturing PPE materials.