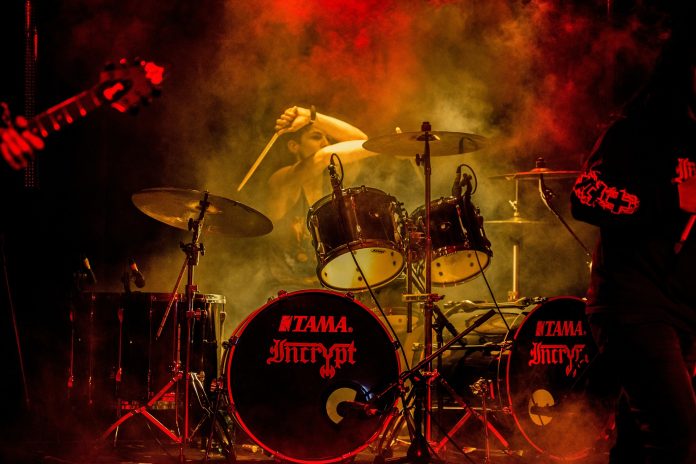 A drum is a musical instrument which produces sound by the vibration of a stretched membrane. The membrane, which is known as the head, covers one or both ends of a hollow body known as the shell.

Music and musical instruments are an extremely important part of human history. The use of rhythm and song has long been used to express meaning, and feeling and accompany rituals. Music has been part of human life for as long as anyone can trace. Early civilisations of humans used music as a way to communicate and express feelings. Out of all of the musical instruments that we see in our society today and use on a regular basis, there is one instrument that stands out in musical history, the drum.

The history of drums is interesting and unique. When you examine this instrument historically, you will find that drums have had a place in almost all cultures around the globe. Variations of drums and drum sets occurred in many different cultures, the standard variety of a drum consisted simply of a hollowed out log or gourd with a piece of skin stretched taunt. Different sizes of gourds and logs created different sounds and beats.

In most African cultures, drums were very important in the use of rituals and religious ceremonies. The people of different African tribes relied on the use of drums to express themselves and when the slave trade began, the drums made the journey across the ocean as well. African drums and drummers provided a unique sound that heavily influenced Western Rock and Roll music. Those same rhythms and beats still provide a strong influence in today’s sounds.

When it was discovered that one player could play two or more drums at the same time, people started placing groups of drums together for one musician to play. These groups were comprised of an assimilation of drums of different cultures and from all around the globe. Cymbals and tom tom drums were brought in from China and the size was adjusted to allow for ease of play when played with drumsticks. In the early 1930’s, musicians slowly discovered with the proper drum placement and a lot of practice, one musician could handle a set of drums, and an entire band of drum players was not required anymore. Thus, a basic kit evolved and took place.

In An Early Kit

The early drum kits were simple in their design, they typically consisted only of:

The Evolution Of The Drum Set

In the 1930’s the drum set was heavily influenced by the sounds of the time, and the early forms of Rock and Roll music. The sounds had a strong basic beat backing them.

In the 1950’s as Rock and Roll music began to develop, the sounds became more complex and likewise, the drum sets became more evolved, with new additions added to them. Rockers began expanding the drum kits adding more cymbals and tom toms drums to them. In addition, as time went on, electronic drums were added to the drum kits as well. All of these additions allowed the musicians to expand their sounds and diversify their music.

In the past, as drums evolved and drum kits developed, new companies were formed and products were fine-tuned and made better. The Ludwig Drum Company is known as one of the most influential and historical drum companies of our time. The Ludwig drum company was started by a young man who enjoyed playing the drums. He could not find a bass pedal that would hold up to his intense drumming style. He shopped around everywhere and could not find an appropriate pedal, so he fashioned one out of wood. The pedal was superior to anything else on the market. His brother, felt that an even stronger pedal could be created out of a metal product, so they teamed up to create an even better bass pedal. Thus, the Ludwig Drum Company was born.

There have been many other types of drum kits and company names that have played an important and influential role in the history of drums. Yamaha, Pearl, Tama and Gretsch are all famous brand names whose drums and drum kits have helped form the drum set, as we know it today.