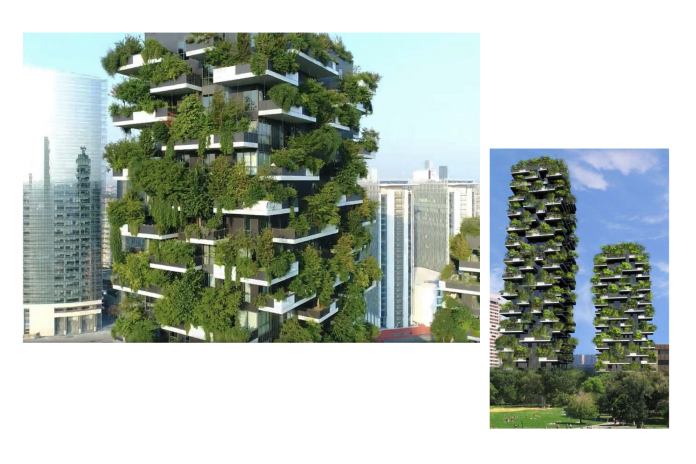 Well, it is startling to know that in today’s “carbon emission friendly” world, the existence of the word ‘Forest’ is a bit uncanny – both literally and figuratively, amidst rigorous deforestation.

Porta Nuova district of Milan, Italy is where you would encounter the Bosco Verticale, otherwise known as Vertical Forest. It is a pair of residential towers, having a height of 111 meters (364 ft) and 76 meters (249 ft ) which is home to 800 trees, 4500 shrubs and 15000 plants – distributed according to sun exposure.

Designers and Architects Stefano Boeri, Gianandrea Barreca and Giovanni La Varra of the Boeri Studio took valuable inputs from horticulturalists, botanists and special gardeners to implement their ideas. The concept of the Bosco Verticale was inspired by the novel ‘The Baron In The Trees’ written by Italo Calvino. The protagonist in the novel decides to leave the lands and live among the trees for the rest of his life. The plants in the structure help in the mitigation of smog and produce oxygen. The building is known to convert approximately 22,000 – 44,000 pounds of carbon each year. The building uses renewable energy from solar panels and filtered wastewater to sustain the buildings’ plant life. The ‘tree-house’ helps absorb Carbon Dioxide in turn reducing the overall waste and carbon footprint of the towers.

Architect Stefani Boeri encourages the concept of Urban Forestation. He is planning to build similar structures in Switzerland, the Netherlands and multiple cities in China. It is the vision of these architects and developers like Stefani Boeri and Hines Italia & COIMA respectively, that can allow the world to develop sustainably.

The new-age architects, designers, and developers should find inspiration in such environmentally amiable structures and come up with more structures that help in curbing the carbon footprint and carbon traces related to the Infrastructure, in more ways than one.

Such structures are valuable to our fight to save the environment and construct sustainably. Bosco Verticale was selected as the Best Tall Building – Worldwide 2015