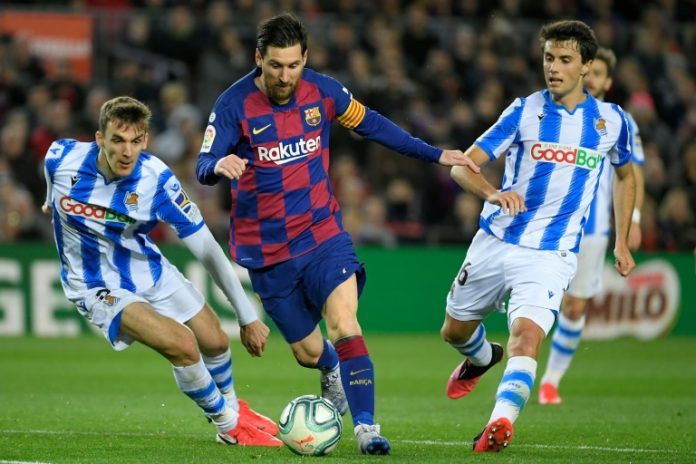 Spanish superclub Barcelona’s colossal cash turnover is under the spotlight after the soccer lockdown slashed the earnings that enabled them pay over 600 million euros ($647M) per year to staff.

Barcelona’s motto is ‘More than a club’, and fans around the globe who tune in to thrill at the hugely succesful side spearheaded by Argentine genius Lionel Messi.

But as broadcasting rights for the lucrative Spanish domestic La Liga and the European Champions League have become compromised, the club has had some delicate economic manoeuvering.

Not least of these was persuading sensitive star players on huge contracts to take voluntary wage cuts.

European football administrators do not allow for wages above 70 per cent of a club’s earnings, with the Catalan outfit sitting was officially around 68 percent.

The wage budget for the current season was 642 million euros with expected earnings estimated at just over 1 billion euros in the pre-season budget presented by the club last July.

“We clearly won’t manage to earn what we had been expecting to,” Barcelona president Josep María Bartomeu admitted this week.

The club are not ony deprived of match-day revenue from 11 domestic games, but all the merchandising that goes with it.

“There has been a huge drop in income and we are trying to compensate this with the reduction of player salaries and all other employees including all our executives,” Bartomeu told Catalan sports daily El Mundo Deportivo.

A project to refurbish the club’s spectacular Nou Camp home has also been put on ice.

Six-time Ballon d’Or winner Messi announced a week ago that Barca’s players had agreed to a 70 percent pay cut.

The players also proposed to make contributions to ensure the club’s non-playing staff could be paid in full during the state emergency in Spain caused by the coronavirus pandemic.

Announcing the agreement, the usually silent Messi directed a thinly veiled swipe at the Barca board, whom he accused of undermining the players during recent negotiations.

His lengthy Instagram post was shared by a slew of teammates, including Uruguayan striker Luis Suarez who lashed out last week after it was revealed the players had initially baulked at the idea.

“We hadn’t come to an agreement because we were waiting to find the best solution for the club, and to our benefit and trying to help the employees,” Suarez told a radio station in his native Uruguay.

Bartomeu says the cuts look drastic on paper but that once observed closely are less severe.

“From the word go, we wanted an agreement, not something that was imposed,” Bartomeu says.

“We came to a flexible agreement conditioned to the number of days the crisis lasts.

“In total the wage cuts will make 16 million euros savings per month. If the lockdown lasts one month, it will be a reduction of 5.75 per cent of the annual salary bill. If it lasts 45 days, it will be 8.6 per cent and if it lasts two months, which we believe not, 11.5 per cent.”

The rest of Barcelona’s staff have been put on partial unemployment.

“Because we are a huge earner we look like we have been hit harder, but once this is over we will be up and running faster too,” Bartomeu says.