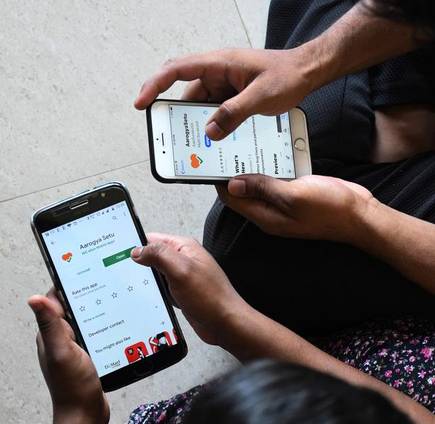 (IANS) The Arogya Setu app has been downloaded by 75 million people on mobile phones, which is now emerging as an important tool in fighting the Covid-19 pandemic.

The Minister of State for Electronics and IT, Communications and HRD, Sanjay Dhotre, reviewed the initiatives taken by different departments and the undertakings of the Ministry of Electronics and Information Technology (Meity) during the Covid-19 lockdown through a video conference on Friday.

The minister was informed that 75 million people have already downloaded the Arogya Setu app on their mobile phones. He called this app one of the most important tools in fighting Covid-19 and one of the lifelines for common people during this global pandemic. He asked the officials to make all out efforts to popularise the app.

According to an official statement, the minister has been keeping a keen eye on Information Technology (IT) and IT-enabled Services (ITES) sectors and he had detailed discussions with the key officials about the gradual opening of these sectors post the lockdown.

Highlighting the role of very large network of CSCs across the country, the minister said that their services may also be tapped for providing telemedicine services, especially in remote parts, during this moment of crisis.

This will bring a much-needed relief to the people who are finding difficulty in accessing medical services during the ongoing lockdown.

He exhorted the officials and stakeholders to orient IT solutions and services in such way that they benefit the common people most during this unprecedented crisis.

He emphasised the crucial role of IT as the backbone for every sector in the country. He expressed that in this time of crisis, the Government of India is working ceaselessly under the leadership of Prime Minister Narendra Modi.