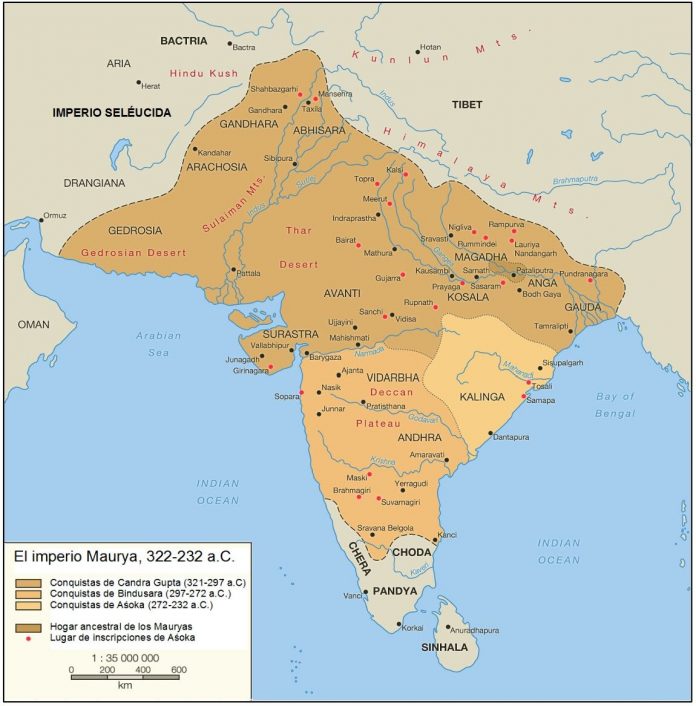 Chandragupta Maurya was the founder of the Maurya Empire in Ancient India. From a humble background, he was picked up, taught and counselled by the greatest mastermind ever in history, Chanakya – a Hindu Brahmin also known as Kautilya and the author of the Arthashastra. Chandragupta with his counsellor Chanakya thereafter together built one of the largest empires ever on the Indian subcontinent.

I have always been fascinated with history, particularly Indian History. My obsession with Chandragupta Maurya began around 14 years ago when I first read about him in my school textbook. Not much was mentioned about his kingdom except the word ‘greatest ruler.’ I got fascinated and I decided to read more about him. I got to know the incredible journey of probably the greatest king of the world.

Today, let me give you sic incredible leadership lessons I learnt from Chandragupta Maurya’s life.

We have often heard we wouldn’t know if we are going to fail at something or not, if we don’t at least try. Chanakya believes otherwise. This ideology simply translates to – life is short and we cannot waste it trying to make unnecessary mistakes and pretending to learn from them. There will be risks at some point and we must take the plunge then. However, it is important to take lessons from other’s life so we can add as much character to ours. We have only so many years on this planet, we need to absorb as much as we can from around us, to be able to live to the fullest.

Friendships are very essential elements of our lives. We grow and learn from them and they are the necessary pillars to our success at times. Chanakya says it is important to realize that there is no friendship that is entirely selfless. It is interesting to think of this as the people we become friends with in the first place at least give us a sense of comfort or belonging, if not more. There is always a give and take in any relationship. If one understands this truth, we can be aware of how much we are ready to invest in any friendship. This can go a long way in keeping our headstrong and focused if ever our emotions and friends tend to derail them otherwise. I believe this. Following this mantra can save us for diverting ourselves from living a life expecting non-sense selflessness from people around us.

No one must ever see the chink in your armor. Chanakya is emphasizing on shielding your weakness from the world here. The world has people and entities that target the weak. It is no secret that we all have our own weaknesses and strengths. It is crucial not to display our weakness to the world. This will only make one vulnerable and an easy target for attack. Instead, we must display a hint of strength, even if we don’t feel particularly strong. Shield yourself by creating an aura of strength!

For any goal or ambition, one needs to have “why” in place. Chanakya thinks that one must go to the depth of our desires in our hearts. Firstly, to realize what exactly we crave for and then to establish that in our subconscious. If you know why you want to do something, everything else will fall in place. You will automatically start waking up at that 5 AM alarm or working an extra hour if you believe in your goal. This will only happen if you analyze how viable your goal is and whether there are real chances of being successful or not. Once you have an answer to these questions in your head, your focus will be like an invincible beast!

We all feel afraid; either of things or the situations that we are faced with in our lives. One often has trouble dealing with how to deal with this fear coming in the path of attaining any kind of success. Chanakya says one shouldn’t run away from it. Being an escapist is a sign of delaying failure. It might be really tempting to try to shelter yourself here, but this is when you need to go all out. Letting you feel the fear and embracing it will eventually destroy it.  As you realize you are afraid of something that is approaching you in your life you must go to the depth of the matter and let it sink through. This will be your way of attacking and destroying it. The only thing to fear is being fearful! It has no other strength to break you other than how it can make you feel. Understand that and destroy its purpose in the first place.

Chanakya’s thinking ideology revolves around a sense of realism. One needs to realize the facts of life and society in order to rise above and eventually beyond it. When one has had enough of false positivity and pretense, a hint of wit and sarcasm from the ocean of ideas of the great Chanakya can become your mantra for success in life!