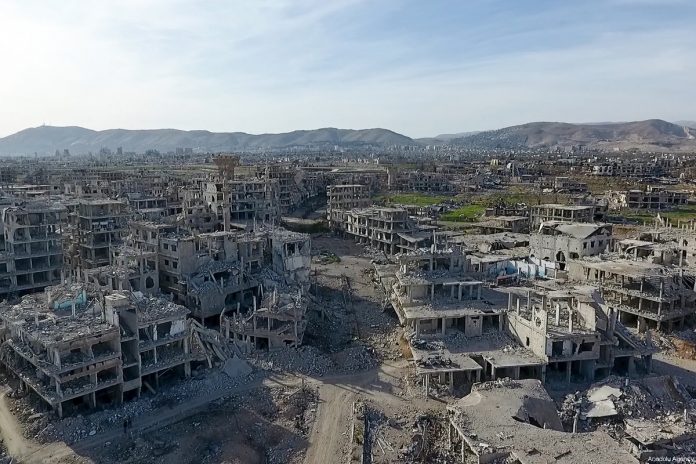 Taher al-Matar’s home in northwest Syria is in ruins but he has gone back to live there anyway, driven by dire conditions in camps for displaced people, where he fears any outbreak of the coronavirus would be devastating.

Even though he worries a fragile ceasefire in the Idlib region may not last, the Syrian father is clearing rubble from what’s left of his house while looking out for any unexploded shells that could have fallen in the last government offensive.

“It’s better than living in the camps. We were there, we lived the humiliation,” Matar, 42, told us in the town of Nairab, where his house, close to a frontline dividing territory held by rebels from Russian-backed Syrian government forces, was destroyed by a missile three months ago.

“They tell us to stay home because of corona …but in the camps, the tents are right next to each other and people can’t keep their distance.”

Matar wants to spend the holy month of Ramadan with his six children at home. “Praise God, I got them out unscathed,” he said. “Now I’m making repairs with my own hands because I have no money.”

Like Matar, thousands of Syrians have started moving back to the Idlib region since a truce brokered by Russia and Turkey took effect in March, halting an offensive in the last remaining rebel stronghold.

Nearly 1 million people were uprooted, many of whom had already fled other battles earlier in the nine-year war. While the region has no confirmed coronavirus cases, with little testing so far, doctors warn its ravaged hospitals and makeshift camps would quickly turn any outbreak into a catastrophe.

A local relief agency said nearly 120,000 people had returned to towns in Idlib and the nearby Aleppo countryside since the ceasefire.

“What will happen next, only God knows… At the end of the day, a person has nothing but his home,” said Saher al-Ali, 32, a driver who also went back to Nairab to try fixing his house.

Air strikes blew out all the windows and doors before his family escaped. After first fleeing to a camp on the border, he searched for other houses, but they were too full or expensive.

“Where was I supposed to live? In the camps or in the street?… If the battles come back, we will flee again.”