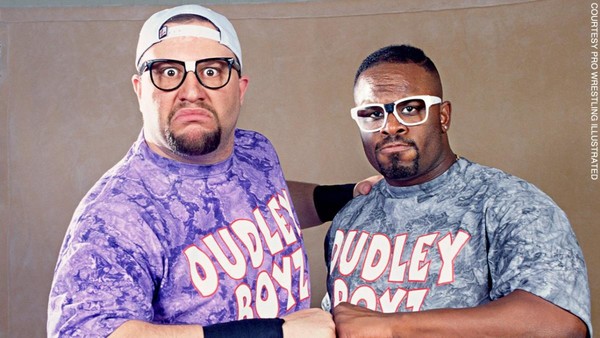 Coronavirus has shaken the world, and WWE Universe is no different. It is sad to watch the WWE without any crowd involvement. However, I stand by Vince’s decision of not surrendering to crisis and taping the show even if crowds are not involved. Health comes first and everyone should be smart and stay indoor. I am not reviewing the recent WWE events because it will be unfair to rate wrestling matches without a crowd. But, I will keep my Pro-Wrestling column updated with a pinch of nostalgia and today, I want to cover 10 of the greatest Tag teams in the WWE since the very beginning. Let’s begin:

You might have not heard of The Wild Samoans as they belong to the era when not many people who are reading this were probably born.

However, one of the keys to success in attaining greatness as a tag team is having longevity as a unit. And longevity usually breeds trust and confidence between the two partners. Plus, having the same bloodline only fortifies the bond. Afa and Sika of The Wild Samoans had all of the aforementioned characteristics and then some.

Their primitive yet ruthless style inside the squared circle usually made it impossible for opponents to map a strategy, which in turn worked in Afa and Sika’s favor. Having worldwide success wherever their travels took them, The Wild Samoans hit their zenith under the managerial guidance of Capt. Lou Albano in the early 1980’s, when they were WWE Tag Team Champions on three occasions. And the ultimate honor — entry into the WWE Hall of Fame — was bestowed upon Afa and Sika in 2007

Before HBK lost his smile and won his first WWE championship at Wrestlemania 12, he was in a promising Tag Team with Marty Jannetty.

Marty Jannetty and WWE Hall of Famer Shawn Michaels were pioneers in WWE, especially when it comes to tag team competition. Their style of fast-paced, high-flying in-ring abilities was revolutionary in a time when WWE was ruled by larger competitors like Hulk Hogan and Andre the Giant. The duo never backed down from a challenge, even if their opponents were the physically imposing and much larger Twin Towers of Akeem and Big Boss Man.

What do you get when you combine an ex-roadie and a former cowboy? One of the most successful tag teams of all time. When “Road Dogg” Jesse James and Billy Gunn formed The New Age Outlaws in 1997, few could have predicted the astonishing success they would go on to achieve. All but one of The Outlaws’ five World Tag Team Championship reigns lasted more than 100 days, and they were the centerpieces of the red-hot tag team division of the “Attitude Era.”

D-Von- Get the tables. It will resonate in my ears until the last day of my life. My favorite tag team, the Dudley Boyz has a long and impacting (see what I did here) career in ECW, WWE, TNA and ROH.

When you look back and see who changed the wrestling industry, you think of Hogan, Bischoff, Vince McMahon, The Rock, “Stone Cold” Steve Austin, Shawn Michaels, Triple H, even Paul Heyman and so many others. But, we often forget that while they may have helped change the industry as a whole, without those inside of the industry making the matches and match types special, the respective companies of all fore mentioned athletes would have been all for not.

The Dudley Boys, also known as Team 3D, include two members, D-Von and Bubba. The two names have never changed no matter where they have gone. These two helped define tag team wrestling and made it something special.

The most dominant tag team in sports-entertainment history, WWE Hall of Famers The Road Warriors made their WWE debut in 1990 as the Legion of Doom. After battling Demolition, Hawk and Animal faced The Nasty Boys and defeated the disgusting duo for the World Tag Team Championships at SummerSlam 1991. This victory made the L.O.D. the only pairing in history to win tag team titles in the three promotions that dominated sports-entertainment in the 1980s: AWA, NWA and WWE.

The biggest moment of The British Bulldogs’ WWE career came at WrestleMania 2 where they defeated Brutus Beefcake and Greg “The Hammer” Valentine for the World Tag Team Championships, but The Dynamite Kid and Davey Boy Smith were good every night. Two hardnosed cousins from an industrial section of England, The Bulldogs brought a blue-collar mentality to the ring, attacking every match as if their paychecks depended on it.

Fine-tuned in Stu Hart’s infamous Dungeon, The Dynamite Kid was considered the best wrestler in the world at the peak of his talents. Gruff and fearless, the 220-pounder used his hardened frame like a weapon as he created beautiful carnage with his body. And Davey Boy was stupid strong. If Dynamite couldn’t win through grit, Smith would do it with brute force.

This daunting opening line from the hard-hitting entrance music of one of the most dominant teams in WWE history couldn’t have been more fitting. Dressed for pure brutality with spiked ring gear and outrageous face paint, the intimidating duo captured the World Tag Team Championships a total of three times — including the single longest tag title reign in WWE history of more than 470 days.

Beware of falling Hardys, the high-flying daredevils who risked life and limb in pursuit of tag team glory at the apex of the “Attitude Era.” An integral part of the tag team renaissance of the early 2000s, Matt and Jeff Hardy were part of the six-headed rivalry (along with Edge & Christian and The Dudley Boyz) that gave birth to the Tables, Ladders and Chairs Match, where they pioneered the modern use of the ladder. The reckless abandon with which they practiced their craft won the brothers numerous tag titles as well as several singles championships between them, to say nothing of the special spot in WWE history reserved for only the most extreme competitors.

Lifelong best friends, Edge and Christian went from school hallways in Toronto to quite literally climbing the ladder of success in WWE. The pairing undeniably “reeked of awesomeness” – their tongue-in-cheek “five-second poses” and proclamations that “sodas rule” were just earnest enough to earn simultaneous adoration and eye-rolls from the WWE Universe.

With their patented Con-Chair-To, Edge and Christian won seven World Tag Team Championships, the first in a Ladder Match against The Hardys at WrestleMania 2000. They defeated both The Hardys and Dudley Boyz in the first-ever TLC Match at SummerSlam, and were victorious in a rematch at WrestleMania X-Seven – hailed by many as the greatest tag team match in WWE history. The longstanding animosity between the three duos consistently resulted in Edge and Christian supremacy, and solidified the team as not just fun and games, but a bona fide force to be reckoned with.

Before WWE fans famously identified Bret Hart as “The Best There Is, Best There Was and Best There Ever Will Be,” The Hart Foundation was held to the same standard in tag teamdom.

Proving why family mattered in WWE, The “Hit Man” and Jim “The Anvil” Neidhart were teammates but also brothers-in-law bound both by familial kinship and a Dungeon-derived mat schooling in Stu Hart’s basement training ground. Determined and devastatingly adept in the squared circle, Bret’s technical expertise complemented The Anvil’s powerhouse panache and unnerving, madman-like laughter. Together, the pair of Harts raised the pulse of the WWE Universe when they crossed the ropes and made their neon shade something respected by rivals and WWE fans alike.

What is your favorite tag team of all time?