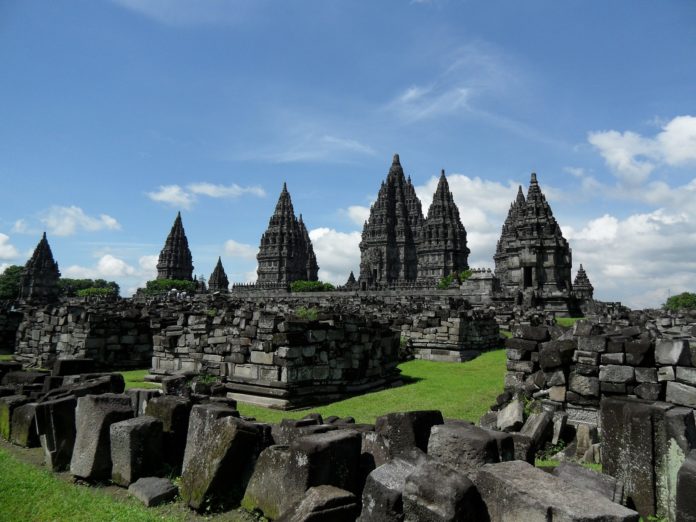 The ancient temples of Prambanan, Sewu and Borobudur in Java are impressive religious monuments made by Asia’s greatest and oldest civilisations.

The Hindu temples at Prambanan and Sewu Buddhist temple date back to the 10th century. The temples at Prambanan have been ravaged by theft, decay, earth quakes and volcanic eruptions. It is testament to the resilience of the local people that they repair and rebuild each time a nature destroys or damages their community and heritage.

The temple compounds are open to visitors and devotees making offerings to the gods. It is considered polite to dress conservatively when visiting the temples. Bare chests, shoulders and skirts or shorts that come above the knee are generally frowned upon.

The Borobudur temple compound was established way back in the 8th century during Syailendra Dynasty. It has survived and thrived for over 1200+ years. Guess what? It is still standing tall.

I took a flight from Singapore. Many flights are also available from Indonesian airports including Denpasar (Bali) and Jakarta. Good news. Java is mainly serviced by the budget airlines.

Australians will need to apply and pay for a Visa on Arrival at the airport. The fee is payable in USD. Always keep your boarding pass from the plane to show to immigration officials when you arrive.

I was able to arrange airport transfers via the hotel where I staying. A driver with a clean, air-conditioned car was waiting for me when I arrived.

Motorbikes are the most popular form of local transport. Becaks (pedicabs) provide tourists with an alternative method of touring the city. Negotiate the fare with the driver before accepting a ride.

There is very little in the way of organised tours to the temples. The best method for exploring these sites is to arrange your own transport. A local guide can be hired when you purchase your tickets at the temple compound.

When I arrived the city had recently been showered in volcanic ash from Mount Kelud. The clean up was still ongoing. To avoid the worst of the dust I decided to hire a driver and a car from the hotel. Bookings could be made for either a day or half day as required.

Let’s now begin with our history part of the article. What I learnt about Java’s Temple History?

The Prambanan temple is the largest Hindu temple of ancient Java, and the first building was completed in the mid-9th century. It was likely started by Rakai Pikatan as the Hindu Sanjaya Dynasty’s answer to the Buddhist Sailendra Dynasty’s Borobudur and Sewu temples nearby. Historians suggest that the construction of Prambanan probably was meant to mark the return of the Hindu Sanjaya Dynasty to power in Central Java after almost a century of Buddhist Sailendra Dynasty domination. The construction of this massive Hindu temple signifies that the Medang court had shifted its patronage from Mahayana Buddhism to Shaivite Hinduism.

A temple was first built at the site around 850 CE by Rakai Pikatan and expanded extensively by King Lokapala and Balitung Maha Sambu the Sanjaya king of the Mataram Kingdom. According to the Shivagrha inscription of 856 CE, the temple was built to honor Lord Shiva, and its original name was Shiva-grha (the House of Shiva) or Shiva-laya (the Realm of Shiva). According to the Shivagrha inscription, a public water project to change the course of a river near Shivagrha temple was undertaken during the construction of the temple. The river, identified as the Opak River, now runs north to south on the western side of the Prambanan temple compound. Historians suggest that originally the river was curved further to east and was deemed too near to the main temple. The project was done by cutting the river along a north to south axis along the outer wall of the Shivagrha Temple compound. The former river course was filled in and made level to create a wider space for the temple expansion, the space for rows of Pervara (complementary) temples.

The temple compound was expanded by successive Mataram kings, such as Daksa and Tulodong, with the addition of hundreds of perwara temples around the chief temple. With main prasada tower soaring up to 47 metres high, a vast walled temple complex consists of 240 structures, Shivagrha Trimurti temple was the tallest and the grandest of its time. Indeed the temple complex is the largest Hindu temple in ancient Java, with no other Javanese temples ever surpassed its scale. Prambanan served as the royal temple of the Kingdom of Mataram, with most of the state’s religious ceremonies and sacrifices being conducted there. At the height of the kingdom, scholars estimate that hundreds of brahmins with their disciples lived within the outer wall of the temple compound. The urban center and the court of Mataram were located nearby, somewhere in the Prambanan Plain.

There are no known records of construction or the intended purpose of Borobudur. The duration of construction has been estimated by comparison of carved reliefs on the temple’s hidden foot and the inscriptions commonly used in royal charters during the 8th and 9th centuries. Borobudur was likely founded around 800 AD. This corresponds to the period between 760 and 830 AD, the peak of the Sailendra dynasty rule over Mataram kingdom in central Java, when their power encompassed not only the Srivijayan Empire but also southern Thailand, Indianized kingdoms of Philippines, North Malaya (Kedah, also known in Indian texts as the ancient Hindu state of Kadaram). The construction has been estimated to have taken 75 years with completion during the reign of Samaratungga in 825.

There is uncertainty about Hindu and Buddhist rulers in Java around that time. The Sailendras were known as ardent followers of Buddhism, though stone inscriptions found at Sojomerto also suggest they may have been Hindus. It was during this time that many Hindu and Buddhist monuments were built on the plains and mountains around the Kedu Plain. The Buddhist monuments, including Borobudur, were erected around the same period as the Hindu Shiva Prambanan temple compound. In 732 AD, the Shivaite King Sanjaya commissioned a Shivalinga sanctuary to be built on the Wukir hill, only 10 km (6.2 mi) east of Borobudur.

Construction of Buddhist temples, including Borobudur, at that time was possible because Sanjaya’s immediate successor, Rakai Panangkaran, granted his permission to the Buddhist followers to build such temples. In fact, to show his respect, Panangkaran gave the village of Kalasan to the Buddhist community, as is written in the Kalasan Charter dated 778 AD. This has led some archaeologists to believe that there was never serious conflict concerning religion in Java as it was possible for a Hindu king to patronize the establishment of a Buddhist monument; or for a Buddhist king to act likewise. However, it is likely that there were two rival royal dynasties in Java at the time—the Buddhist Sailendra and the Saivite Sanjaya—in which the latter triumphed over their rival in the 856 battle on the Ratubaka plateau. Similar confusion also exists regarding the Lara Jonggrang temple at the Prambanan complex, which was believed to have been erected by the victor Rakai Pikatan as the Sanjaya dynasty’s reply to Borobudur, but others suggest that there was a climate of peaceful coexistence where Sailendra involvement exists in Lara Jonggrang.

(History is Sourced from Wikipedia)

The site that incorporates Prambanan is now included on the UNESCO world heritage list.