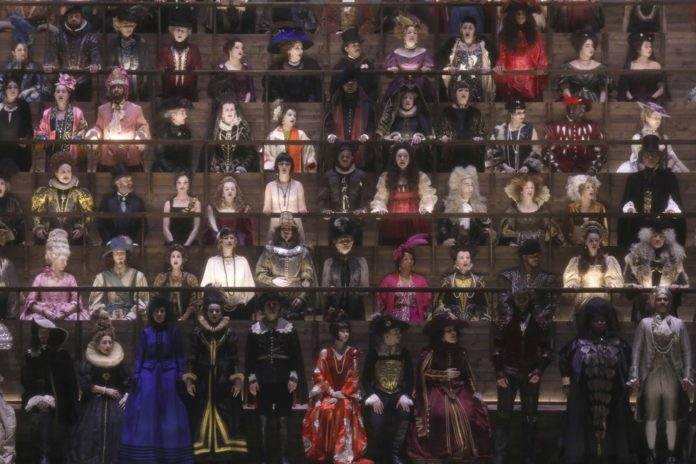 Louis Vuitton staged a dazzling cinematic fashion production to cap Paris Fashion Week on Tuesday, with a wall of around 200 human figures dressed in fashions that spanned human history.

While, Chanel staged a comparatively low-key affair, as the coronavirus outbreak kept many of the regular VIPs and fashion editors away. Some guests who made it wore CC-branded face masks, while others watched the Parisian stalwart’s display streamed online. Restraint was also evoked in Chanel designer Virginie Viard’s designs: A marked departure from her showman predecessor and mentor, the late Karl Lagerfeld. Simplicity was the Chanel “mot du jour” — from the set of tiered white steps to the pared-down aesthetic of monochrome.

Here are some highlights on the last day for fall-winter 2020 ready-to-wear.

Guests marveled, as the show began inside the Louvre’s Cour Carree, to reveal a “wall” full of 200 people dressed in glimmering historic costumes, ranging from the 15th century to the 1950′s.

It was an arresting spectacle, especially when music sounded in a beautiful and stirring harmony.

The set, by Stanley Kubrick’s costume designer Milena Canonero, led the house to ask: “ What if all of the innumerable eras that nourish fashion could come together?”

Yet despite the exorbitantly-priced set piece, and a few garments, the answer was thin. The journey through design history in this Ghesquiere showing was relatively limited and the runway seemed to explore different themes to those evoked by the set piece.

Some historic-looking puff skirts with layers in gold gave certain looks a period air, as did bejeweled and embroidered jackets with a semi-circular lapel the historic musing was scant.

But front row of stars, including Alicia Vikander, Lea Seydoux and Lupita Nyong’o, attested that this show was instead rooted firmly in the present.

The collection, albeit finely executed, was rather hard to pin down.

“A very simple, very pure momentum. Romanticism, but without any flourishes,” is how Viard described her designs.

Evoking French film director Claude Chabrol’s 1968 film “The Does,” a lesbian drama, female models walked the runway together and chatted like intimates in the first looks. The models wore stylish retro black leather boots, ones with a brandy bell-shaped collar at the mid-calf that became the collection’s leitmotif.

Viard’s simplest designs were the most effective: A black silk bodice dress with the top lobbed off and dropped Juliette sleeves. Modeled by Cindy Crawford’s daughter, Kaia Gerber, it had guests clicking their cameras. And voluminous studded jodhpurs that opened up at the bottom cut a beautiful silhouette. This design, Viard said in a touching detail, was an homage to Lagerfeld’s personal style. Another simple garment, a loose wool jacket in Chanel’s emblematic pink with a soft-spiky collar, was a high point.

Yet, a drawback of the tasteful showing were some of the overly flashy gold chains and costume jewelry that often distracted the eye from the show’s central aesthetic.

There has been renewed focus on Miuccia Prada after she announced during Milan Fashion Week that she had hired Belgian designer Raf Simons as co-creative director of the family house that she directed to icon status.

The first show since then for Prada’s little-sister brand, Miu Miu, did not disappoint creatively. The “intellectual” fashion display was a pastiche of itself.

Old school glamour came in an emerald green crinkled silk column dress, modeled with 1930s-style wavy hair that looked like it had been left in curlers a little too long.

As expected from Miu Miu, the fun vibe was everywhere: from the patterned runway that confused the eye when a model in a plaid split-leg dress walked it to the knit Cetacean blue bathing suit sweater and bright red furry heels worn by model Bella Hadid.