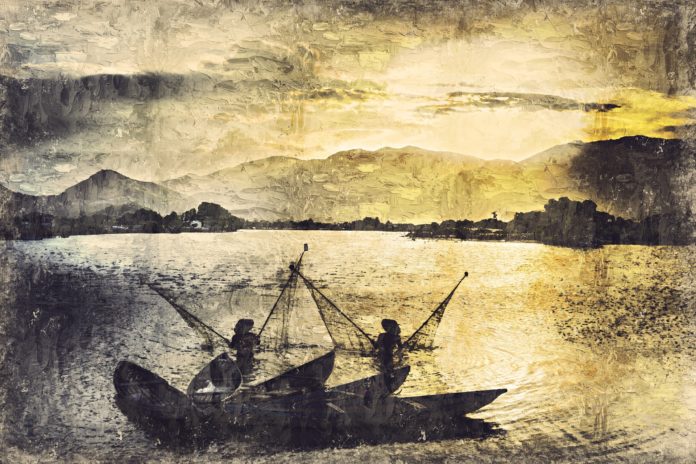 The concept of war has been a primary theme throughout literature and art. Wars have been a part of the human experience that has been fought with swords and guns, and expressed with paintings and symbols. War and opposition to war have been reflected throughout history by using the tools and texts of political science, sociology, history, literature, music, and the visual arts. The Vietnamese society has been no exception to the above.

Vietnam has a history as rich and evocative as anywhere on earth. The American War in Vietnam captured the attention of the West, but centuries before that Vietnam was scrapping with the Chinese, the Khmers, the Chams and the Mongols. Vietnamese civilization is as balanced as that of its mighty neighbour China, from where it has drawn many of its influences under a thousand year occupation. United States was the last in a long line of invading superpowers who had come and gone through the centuries and, no matter what was required or how long it took, they too vanquished. Although the war has been over a long time, it has left long lasting scars on the minds of the Vietnamese people. The war artists have captured the historic moments on the canvasses.

Artists throughout history have depicted wars and Vietnam War belongs to this tradition. Official war artists, Vietnam veterans, interested dreamers and people who opposed the war developed Art from the Vietnam War. It also includes political and social posters and cartoons. The War is an important event of the American experience. Researchers have explored the war and its outcomes, and artists from all the different fields of interest have depicted it in their paintings. Even though the conflict itself lasted from 1961 to 1975, the Vietnam War continues to be the focus of extensive research and pop culture.

Almost all the artists were vocally against the war and used their talent to express the horror and human tragedy. From the time of the war, some veterans and even their families have expressed their experiences of and feelings about the war in artistic form. The war artists have staunchly opposed the war and depicted its inhumanity through naked, flayed figures against raw linen grounds and scenes of U.S. soldiers attacking Vietnamese civilians. Dinh Q. Lê Chen, Liza Nguyen, Binh Danh, An-My Lê and Johnny Miller are among the few famous and talented artists who have been in direct relationship to the Vietnam War. Each artist explores the war recollection through parents, historical accounts from available publication, or even Vietnamese born with childhood experiences. The unforgettable and emotional memory of the war has been affected equally by the loss each one faced because of the physical damage during the war.

The Vietnam War profoundly influenced Society in America and most accounts of the period dwell on the war’s domestic conclusions. The war is still a constant reminder to its citizens’ of its pains, through memorials, war cemeteries, bomb craters, damaged ancient ruins, isolated scrap metal, land mines, and hidden traces of dioxin in the soil. These artworks and monuments now form the bulk of the freshly revived tradition of Vietnam art, which is steadily making its presence felt among the artists of the world.