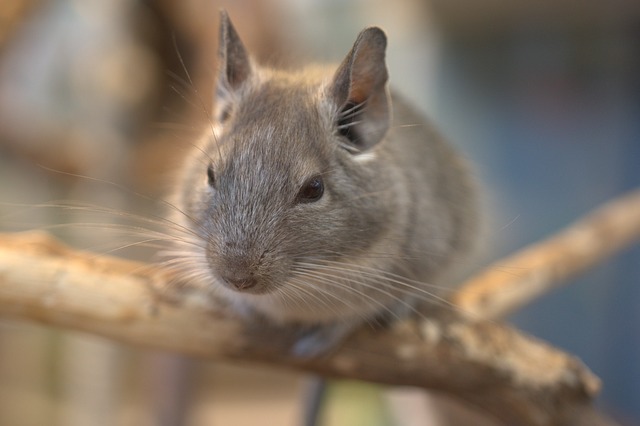 Chinchillas are either of two species (Chinchilla chinchilla and Chinchilla lanigera) of crepuscular rodents of the parvorder Caviomorpha. They are slightly larger and more robust than ground squirrels. Historically, chinchillas lived in an area that included parts of Bolivia, Peru, Argentina, and Chile, but today, colonies in the wild are known only in Chile. Along with their relatives, viscachas, they make up the family Chinchillidae. They are also related to the chinchilla rat.

Chinchilla habitat is a dry and almost desert-like place, covered with rocks and succulents. Located in the arid areas of the Andes Mountains, rain does not visit too often. And though the rocky terrain may seem lifeless in the day, aside from the various plants that cover the region, chinchillas are among the many animals that actually hide underneath rock crevices and borrow on succulents or underground. They usually stay in and sleep during the daytime, and come out mostly either during dawn or dusk when the environment gets cooler. They also take advantage of the low light during such times to go about their activities and to evade predators.

The daily routine of wild chinchillas includes rummaging through the terrain for food, grooming, mating, taking dust baths in fine sand or volcanic ash present everywhere in the area, and even playing with natural objects scattered about.

Chinchillas in the wild have been observed to eat a diet that is generally composed of tiny insects, fruits, seeds, and plants; usually feeding on succulents to get the water stored in their flesh.

At home, pet chinchillas may only deal with cats, dogs, and rats as threats to them. In the wild, they are always on the watch for predators. This includes cats, dogs, birds, and even snakes. Compared to other animals, chinchillas have higher sensitivity to sound, a keen sense of smell, and see well in the dark. Since chinchilla habitat is all rocks they leap well and are swift runners. They use these characteristics to help them successfully evade danger, scampering away quickly and hiding. In the event of a confrontation with a predator, chinchillas can release fur and spray urine as a defences. During such occasions, they stand on their hind legs and chatter their teeth.

There is obviously more safety in numbers. Chinchillas are social creatures and will gather in groups of up to more than 15. While together, activities include mutual grooming and mating. They do not have any specific season to mate; males often ready to do so with any female at her sexual peak. The mating ritual between chinchillas has been observed to include the male wagging its tale or both chinchillas rubbing their chins on the ground. Aside from a variety of sounds used to communicate with each other, they also rub noses. These groups, known as “herds”, keep chinchillas safe. They give alarm calls to one another to alert the approach of a predator. This can either be heard as a set of loud squeaks or a short burst.

Knowing about Chinchillas is an excellent way to understand how nature, even in the toughest of terrains, presents life. Life, as we know it, is way more complex than we would ever know.