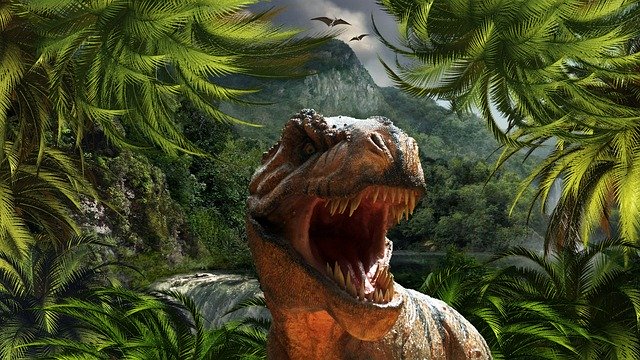 The extinction of the dinosaurs occurred during the conclusion of the Cretaceous Period, around 65 million years ago, and caused the loss of up to 76 percent of all life on the planet. Although this event was not the only mass extinction in Earth’s history or the most severe, dinosaur extinction has spawned a range of theories from the credible to the less than believable.

If an Ice Age occurred during the Cretaceous Period, a considerable amount of the planet’s water and large areas of land would have been locked in ice. Since dinosaurs were thought to be cold blooded they would probably not have been able to cope with such extreme conditions and their numbers would have eventually dwindled.

Disease (a virus that infected dinosaurs millions of years ago) is another suggestion for the extinction of the dinosaurs. It is difficult to see however how one disease could be so prevalent as to wipe out large swathes of the animal population, travel vast distances and kill off both land and marine species as well as plant life. (Sorry Coronavirus!)

If a gradual change in the earth’s climate occurred with a cooler, drier environment and an adapting plant life, possibly the dinosaurs would not have been able to adapt quickly enough to survive. The fossil records of dinosaur skulls show they could only have had small brains. This indicates dinosaurs relied on automatic body responses rather than the cognitive, decision making responses warm blooded animals are known to make. Therefore a changing environment could have been difficult for dinosaurs to adapt to and they may not have been able to compete effectively with warm blooded animals.

A supernova is a star that explodes with enough energy to keep our sun burning for six billion years. If the Earth was hit by the resulting radiation from a nearby supernova it would have destroyed all dinosaur life. There is no evidence for a supernova causing the extinction of the dinosaurs, and it is difficult to see how anything would have outlived such an event.

It is known that volcanic activity was widespread during the Cretaceous era, and is a credible reason why the dinosaurs became extinct. The Deccan Traps in Western India (NYK Daily’s Boss Arushi Sana and Nikhil Chandwani live there. Hi guys!) and areas in the Pacific Basin are likely sites for increased volcanic activity at this time.

The consequences of large scale volcanic activity would have led to a nuclear type winter with ash and gasses added to the atmosphere, depleting sunlight and creating difficult conditions for dinosaur species. Hydrochloric acid in particular would have broken down the ozone layer allowing harmful ultraviolet rays to penetrate to the surface.

The high level of volcanic activity would also have emitted large volumes greenhouse gasses such as C02 and methane, increasing the Earth’s temperature and drastically changing the planet’s climate. The effects on the dinosaurs would have been catastrophic as they struggled to acclimatize to the changing conditions, and large scale extinction of dinosaur species would have been inevitable.

In the late 1970’s Luis and Walter Alvarez and scientists from the University of California were studying rocks of the K-T boundary (or Cretaceous-Tertiary boundary) in Gubbio, Italy. Within the clay layer of the K-T boundary they discovered concentrations of iridium thirty times higher than normal. The two natural sources of this rare element are asteroids and lava from the Earth’s core, which led Luis and Walter Alvarez’s team to first suggest an asteroid collided with the Earth causing dinosaur extinction. The Alvarez team estimated the asteroid would need to be ten kilometers in diameter to contain enough iridium to cause the iridium concentrations in the clay layer.

Further evidence to support an asteroid impact has emerged. The K-T boundary has two layers. The upper layer is three millimeters thick and includes soot which is believed to have come from global fires caused by the impact.

The lower level is two millimeters thick and contains ejecta from the asteroid impact site. This includes quartz crystals known as shock crystals which have been physically altered by high temperatures and intense pressure. The layer also contains tektites and micro tektites, which are often made of fused glass. Shocked crystals and tektites are both closely associated with asteroid impact sites.

In 1990 the scientist Alan Hildebrand, after studying data gathered by geophysicists searching for oil, noticed a ring structure called Chicxulub off the Yucatan Peninsula in Mexico. Chicxulub is a crater 180 kilometers in diameter and dates from around 65 million years ago, the same time as the extinction of the dinosaurs. It was estimated that an object ten kilometers in diameter impacting the site would have caused the crater, which fits the Alvarez team’s calculations for the size of the asteroid to create the K-T boundary finds.

The Effects Of The Asteroid Impact On The Dinosaurs

It is estimated the speed of the asteroid would have been about 100,000 kilometers per hour and the initial impact would have destroyed everything within a 500 kilometer radius. The intense shock wave that followed would have caused large scale fires, whilst trillions of tons of debris, gas and water vapor would have been thrown into the atmosphere.

Earthquakes, tidal waves, volcanic eruptions as well as high winds would have followed. The soot and debris in the atmosphere would have blocked out the sun for months leading to fluctuating temperatures and severe disruption to photosynthesis. The global fires would have emitted large volumes of CO2, increasing global temperatures and causing a chain reaction that would create sulphur dioxide falling as acid rain.

Fires would have destroyed up to twenty five percent of all vegetation, and with photosynthesis unable to function effectively plant eating dinosaurs would have starved. This in turn would have led to large scale deaths of the carnivores bringing dinosaurs to extinction. Smaller animals such as scavengers and birds that could have traveled longer distances in search for food would have been more likely to have survived.

The levels of oxygen in the sea would have decreased as deep sea water was dragged to the surface by huge under water currents. Plankton would have died as a consequence leading to a collapse of the food chain and widespread death. Acid rain may also have increased the acidity of the sea, killing vulnerable species.

Problems With The Asteroid Theory

Whilst an asteroid impact has gained ground over most other theories, there still remain problems with the theory. Paleontologists have yet to find dinosaur fossils dating to the time of the impact, and some evidence suggests dinosaurs may have already been extinct before this event. In fact dinosaurs had been steadily declining for tens of thousands of years before the Chicxulub asteroid impacted.

In spite of these problems with the asteroid theory it is still the strongest explanation for the extinction of the dinosaurs. Perhaps the answer lies not with one explanation for dinosaur extinction but a combination of factors such as the asteroid impacting at a time of increased volcanic activity. In the final analysis, perhaps the extinction of the dinosaurs was a case of an accumulation of badly timed events that very few species could cope with.