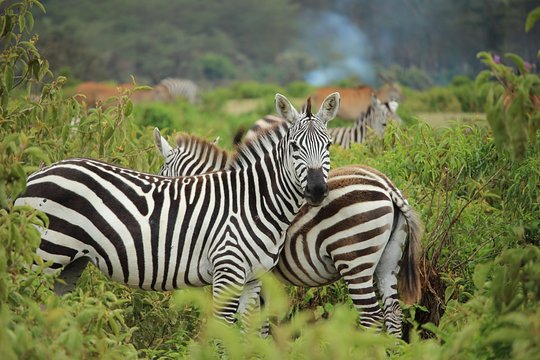 Hell’s Gate National Park lies south of Lake Naivasha in Kenya, north west of Nairobi. It is named after a narrow break in the cliffs, once a tributary of a prehistoric lake that fed early humans in the Rift Valley. Established in 1984, it is known for its numerous wild species and heart stopping scenery.

Last week, I was riding my bicycle and there’s an angry, yet cute (just like my boyfriend) buffalo not so far away. This is Hell’s Gate National Park, famous in Kenya for its largely predator-free environment (angry buffalos don’t count), and hence providing the unique opportunity to cycle or walk in the wild. Often on safari, you find yourself either on a game drive or driving to the next park – either way, you tend to spend a lot of time in a vehicle. Hell’s Gate gives you a chance to stretch your legs and in this article you are going to find everything you need to plan your experience.

Last week, one of my Colleague, working with Discovery Wild, and I took two of his children for a bike ride through the Hell’s Gate. We saw elands, Zebras, gazelles, buffalos, baboons, giraffes and warthogs. I saw high velocity excitement among kids, despite their father being a travel journalist, they have not had much opportunity to go on safari themselves. My colleague has inherited his dad’s keen spotting eyes and, with the energy of an nine-year-old, zoomed ahead to report the warthogs and buffalos that we were about to see. Leopards and hyenas also live in the park, but they are a rare catch.

The most common trail is eight miles from Elsa’s gate to the Ol Njorowa Gorge. At Elsa’s gate, the main entry point for Hell’s Gate, bicycles are available for hire. There are other places to hire bicycles from local guides, which is perfect if you want to also take a guide into the park. Don’t expect top quality bicycles, but the brakes worked, the wheels went round and, for the most part, we could change gears.

About one mile from the gate is Fischer’s Tower, where rock climbing equipment is set up. Hell’s Gate is more famous for its geological formations than its animals, and Fischer’s Tower is a rocky pinnacle that pokes up from the ground in the middle of otherwise flat land. The tower is only 25m high, so it is quite easy to scale.

Ol Njorowa Gorge is the highlight of the park. Guides are stationed at the gateway to the gorge where there is also a picnic site and car park. There are two walks to choose from – the shorter walk takes 40 minutes to one hour and the longer one is two to three hours. On the longer walk you will see where Tomb Raider with Angelina Jolie was filmed.

A further 5.5 miles on is the Geo Spa. Hell’s Gate was named for the steam coming out of the rocks creating a likeness to what the gateway to hell might look like. The whole Rift Valley was created through volcanic activity and many mountains throughout the valley are dead volcanos. There is still a lot of geo-thermal activity occurring in the area, with Hell’s Gate being the most active. The Kenyan government is working with foreign experts to create a massive geo-thermal plant which will ultimately provide 40% of Kenya’s electricity. The Spa is where you can get close to the geo-thermal activity and take a shower in the hot springs.

If you feel like you need more than a day to enjoy all these activities, there are a couple of campsites in the park. The facilities are normal, but when you are camping inside a national park in Kenya, that is enough excitement to overcome not having a hot shower.