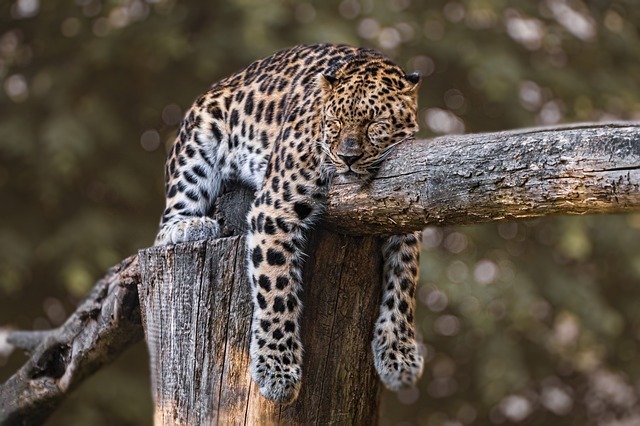 Jaguar is a majestic animal from the Leopard family.

The jaguar is a large felid species native to the Americas. The jaguar’s present range extends from Southwestern United States and Mexico in North America, across much of Central America, and south to Paraguay and Argentina in South America. Though there are single cats now living within the Western United States, the species has largely been extirpated from the United States since the early 20th century. Bloody Humans! They hunted most of the Jaguars already.

Overall, the jaguar is the largest native cat species of the New World and the third largest in the world. This spotted cat closely resembles the leopard, but is usually larger. It ranges across a variety of forested and open terrains, but its preferred habitat is tropical and subtropical moist broadleaf forest, swamps and wooded regions. The jaguar enjoys swimming and is largely a solitary, opportunistic, stalk-and-ambush predator at the top of the food chain. As a keystone species it plays an important role in stabilizing ecosystems and regulating prey populations.

Most of Jaguar’s family members are now extinct, long gone from the face of the earth, mainly due to the long and tiring Ice Age.

Jaguars, on the other hand, survived the meteor strike, ice age, massive volcanoes and made it to the new world. They’re barely visible now, because surviving humans is only possible if you have a Nuclear Weapon, and Jaguars don’t have any.

The genus Panthera probably evolved in Asia between six and ten million years ago. The jaguar is thought to have diverged from a common ancestor of the Panthera at least 1.5 million years ago. Results of jaguar mitochondrial DNA analysis indicate that the species’ lineage evolved between 280,000 and 510,000 years ago. Its immediate ancestor was Panthera onca augusta, which was larger than the contemporary jaguar.

Phylogenetic studies generally have shown the clouded leopard is basal to this group.

Fossils of extinct Panthera species, such as the European jaguar and the American lion, show characteristics of both the jaguar and the lion. Based on morphological evidence, jaguar is most closely related to the leopard However, DNA-based evidence is inconclusive, and the position of the jaguar relative to the other species varies between studies.

Jaguars are extremely old. They preside humans by at-least three million years. After evolving in Asia, they began spreading both west and east, eventually inhabiting a range from England to Nebraska and down into South America. Jaguars penetrated the South American Mountains way before the Spanish Inquisition. Take that, Spain. Jaguar’s ancestors would have been extremely large compared to what they are today. They moved across the West in search for food.

Today’s range of southern Arizona to Argentina—over 3.4 million square miles—is only a small part of their Ice Age expansion. And it wasn’t just the jaguar’s range that shrunk. Today the spotted cats are about fifteen percent smaller than their predecessors.

The Jaguar is believed to be very closely related to the Leopard according to DNA testing. So, did Jaguars evolved from Leopards? Maybe!

Ice Cage wiped out most of the animals in the wild. The American lion, the sabercats, and other predators are all long gone from the face of this planet. Jaguar survived, and rightfully so. How? The Diet Plan.

Jaguars hunted down and ate wild pigs, caimans, collared peccary, nine-banded armadillo, giant anteater, and white-nosed coati. These species account for 16-21% of the jaguar diet. Being large in size, back in the day (back in the day is an understatement, let’s call it around 3-4 million years ago), Jaguars kept migrating without giving up, and this lead them to Central American Forests. Central America was one of the best places to live in during the ice age and that’s how Jaguars were able to keep themselves alive.

Flexibility in diet also helped Jaguar survive all these years. Unlike other mammals, Jaguar was happy eating whatever entered it’s mouth. Jaguar wasn’t moody, and even hunted birds to satisfy hunger. Lack of Zomato in those sad years of evolution didn’t stop Jaguar from filling it’s stomach, and that’s how they made it to the modern world- smaller than before, but proud and happy to have faced death successfully.

The jaguar’s coat has different colors, but they are usually yellow-brownish with black spots, like leopards. The jaguar’s coat on its side and back is spotted with large black rosettes, each consisting of a circle of spots surrounding a central spot. The spots on its head, legs, and underside are solid black. Jaguars, in the past, mated with other animals from the same family. This is the reason why they’re full of colors. Inter-animal mating is something that is not a phenomena now, but during earlier stage of evolution the animals were really wild. (You know what I did there?)

Future is dark for the Jaguars. Jaguar populations are rapidly declining. The species is listed as Near Threatened on the IUCN Red List. The loss of parts of its range, including its virtual elimination from its historic northern areas and the increasing fragmentation of the remaining range, have contributed to this status.

The major risks to the jaguar include deforestation across its habitat, increasing competition for food with human beings, especially in dry and unproductive habitat, poaching, hurricanes in northern parts of its range, and the behavior of ranchers who will often kill the cat where it preys on livestock. When adapted to the prey, the jaguar has been shown to take cattle as a large portion of its diet; while land clearance for grazing is a problem for the species, the jaguar population may have increased when cattle were first introduced to South America, as the animals took advantage of the new prey base. This willingness to take livestock has induced ranch owners to hire full-time jaguar hunters.