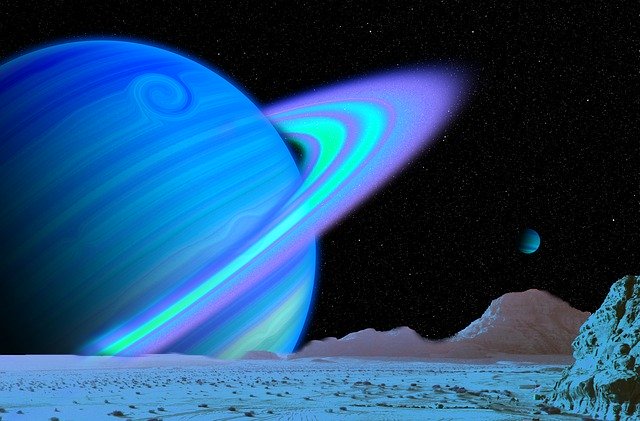 Uranus is the ancient Greek deity of the Heavens, the earliest supreme god. Uranus is the seventh planet from the Sun and the third largest (by diameter). Uranus, the first planet discovered in modern times, was discovered by William Herschel while systematically searching the sky with his telescope on March 13, 1781. Uranus is composed primarily of rock and various ices, with only about 15% hydrogen and a little helium (in contrast to Jupiter and Saturn which are mostly hydrogen). Uranus’ atmosphere is about 83% hydrogen,15% helium and 2% methane. Uranus’ blue color is the result of absorption of red light by methane in the upper atmosphere. Uranus is a large, plain, blue-green planet which can only be seen from the Earth with the unaided eye on a clear, dark night. Uranus has 15 satellites orbiting in nearly circular orbits in the planet’s equatorial plane, hence they are also “tilted” about 90 to the ecliptic.

Uranus’ core is in many ways similar to the cores of Jupiter and Saturn minus the massive liquid metallic hydrogen surrounding the cores. Uranus’s diameter is four times larger than Earth’s and its mass is 14. Uranus is best remembered as the “tilted planet,” or the “planet that rotates on its side,” because of the inclination of its rotation axis with respect to its orbital plane.

The rings of Uranus were discovered from ground-based observations in 1977. Rings of Uranus has a faint planetary ring system, composed of dark particulate matter up to ten meters in diameter. There are 11 known rings, all very faint; the brightest is known as the Epsilon ring. This was of considerable importance since we now know that rings are a common feature of planets, not a peculiarity of Saturn alone. These rings are very dark and narrow, unlike Saturn’s, which are bright. Uranus has 21 known natural satellites (and may have at least 27), both within the rings and outside of the rings.

Orbit around the Sun: Uranus goes around the Sun once every 84 Earth years. Most have nearly circular orbits in the plane of Uranus’ equator (and hence at a large angle to the plane of the ecliptic); the outer 4 are much more elliptical.

Uranus is nevertheless hotter at its equator than at its poles. Uranus is no longer the bland boring planet that Voyager saw. Uranus is unique in our solar system because it is tilted 98 degrees. Uranus is the farthest planet that can be seen without a telescope. Uranus has a mass (quantity of matter) 14 1/2 times larger than that of Earth. Uranus seems to radiate as much heat into space as it gets from the sun. Uranus is composed mostly of liquid water, methane and ammonia, surrounded by a thick gas atmosphere of mostly hydrogen and helium. Uranus, like Venus, has a rotation axis that is greatly tilted and sometimes points near the Sun. Uranus is composed mostly of rock and ices, but with a thick hydrogen and helium atmosphere.