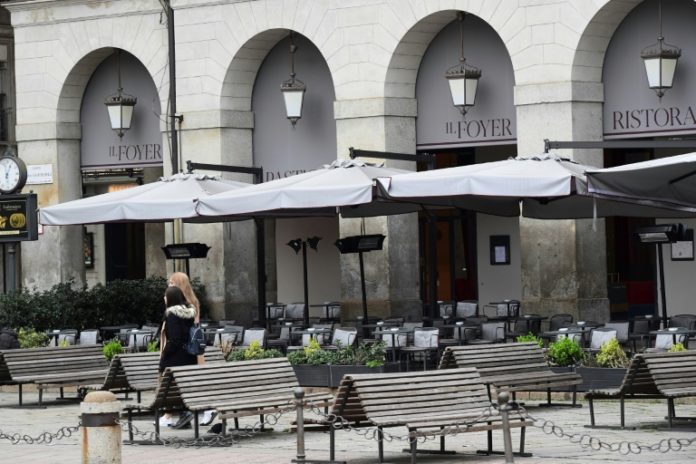 Milan, Italy’s usually bustling economic and fashion capital, has been twiddling its thumbs since Monday, paralysed by a virus that has killed 29 and infected more than 1,000 people in Italy since breaking out just 60 kilometre (37 miles) south of the city a week ago.

Tarcisio De Bacco, owner of the iconic Il Biffi restaurant around the corner from the lace-like Duomo cathedral, cannot wait until the day life returns to the way it was.

“We lost 90 percent of our clientele this week,” he said, casting a mournful look across rows of empty white clothed tables.

“At this hour, we are usually overwhelmed.”

Il Biffi holds a coveted spot in the majestic Vittorio Emanuele II gallery, whose arched glass ceilings and marble floors are themselves a tourist destination.

The gothic cathedral beside it — effectively the city’s symbol — was closed this week under orders of the Lombardi regional authorities to curb the spread of the COVID-19 disease.

The authorities have meted out the same punishment to museums, theatres such as the La Scala, night clubs, schools, gyms, swimming pools and just about any other place where people spend time outside work and home.

In the homeland of the “aperitivos” — perhaps a cocktail or a glass of wine with a little nibble after work — bars were all forced to close from 6:00 p.m. on Monday and Tuesday.

An all mighty outcry from the Milanese forced the authorities to make and exception to the rule starting Wednesday.

“The situation is pretty dramatic,” said Micaela Mainini, owner of the Jamaica bar, who also operates a restaurant and was able to stay open the whole time.

“We are very well known and still things are pretty dramatic for us. I can’t begin to imagine what other people are going through.”

“Hysteria is very dangerous for the economy,” Mainini warned, blaming wall-to-wall media coverage of the epidemic for the growing sense of doom.

In a city of almost 1.4 million, just about everything seems closed.

Two trade fairs — one for eyewear called Mido and another simply called Myplant & Garden — were postponed this week, as has a furniture show scheduled for April.

The average occupancy rate of hotels stands at 20 percent, compared to 85 to 90 percent usual for the end of February.

The Federalberghi hotel federation called the whole thing a “disaster”.

And it is only getting worse. More than half a million rooms have been cancelled for bookings between February 24 and the end of April.

Faced with low demand, airlines such as the popular UK no-frills carrier EasyJet have cut flights to northern Italy.

A city once know for its smog and darkness had been revelling in a tourist boom since it hosted the World Expo in 2015.

The virus came as “a shock for the city,” said Marta Tegnani, an optimistic 49-year-old who still thinks things will improve in the coming weeks.

“The city is almost deserted, the metro and the buses are empty — it all has a funny affect on you,” she said.

Many companies now rely on various work from home schemes. The headquarters of Italy’s Unicredit banking group, which fill a large tower in which 4,000 work, stands almost empty.

Yet for some, this is a chance to enjoy a bit of tranquility.

“Sure, it’s a nuisance. But rarely do we have such unpolluted air in February,” said Fabio Cogognini, 46.

“These are the things we should be thinking about.”

Days after receiving good news about the bars being allowed to serve aperetifes in the evening, the Duomo itself is expected to swing open its doors to visitors on Monday.

And while the morale of many is almost flagging, restauranteur De Bacco remains optimistic.

“So something like the coronavirus is not going to bring Milan to its knees,” he said. “Absolutely not.”