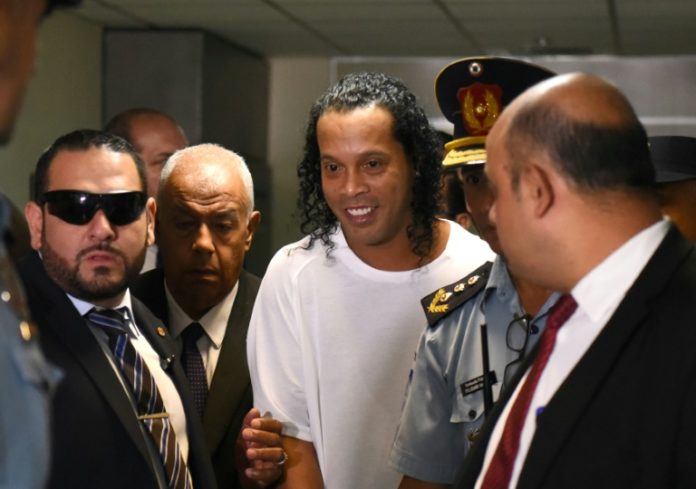 Lawyers for Brazilian football great Ronaldinho are trying to organize a hearing to get him temporarily released from detention for allegedly entering Paraguay with a fake passport, defense sources told AFP on Monday.

Ronaldinho and his brother Roberto were arrested on Friday and held in pre-trial detention in Asuncion for entering Paraguay using forged documents.

Sources close to his defense team told AFP the lawyers were trying to get the brothers a hearing on Tuesday in the hope of securing their temporary release.

Ronaldinho’s Brazilian lawyer Sergio Queiroz has previously insisted that the two-time world player of the year’s detention was “illicit, illegal and unlawful.”

“Ronaldinho did not commit a crime because he did not know that the passport they gave him was faked,” he said.

The brothers are spending a fourth day behind bars in the Paraguayan capital Asuncion, where late summer temperatures have soared to 40 degrees Celsius.

Queiroz wants the pair to be released and allowed to return to their home country.

He said prosecutors originally agreed that the footballer had acted in good faith before a judge ordered their detention, which Queiroz described as unwarranted.

Ronaldinho, considered one of the greatest footballers of all time, was one of the stars of Brazil’s 2002 World Cup win and played for European giants Barcelona Paris Saint-Germain and AC Milan, among others.

He and his brother arrived in Asuncion from Brazil on Wednesday and showed their passports to immigration police, who did not immediately notice any problem with the documents.

Hours later, when the passports were determined to be fake, investigators raided the hotel room Ronaldinho was staying in and seized the brothers’ identity cards and travel documents.

Ronaldinho said the passports had been given to him by people who had invited him to attend conferences sponsored by charities working with disadvantaged children.

A Brazilian businessman has also been arrested in connection with the fake passports, while two Paraguayan women have been placed under house arrest and Paraguay’s migration director has resigned.

Queiroz said the brothers were offered the passports “to facilitate the possibility of doing business” in Paraguay.

“The idea was to position Ronaldinho with brands and companies,” he added.

Paraguayan president Mario Abdo on Monday revoked by decree the legal status of the foundation that invited Ronaldinho to the country.

Defense lawyers for the “Angelic Fraternity” foundation’s administrator, Dalia Lopez, acknowledged that she had requested official Paraguayan passports for the brothers but said she had no idea that those delivered were fakes.

Authorities have issued a warrant for her arrest.

Lopez’s lawyers said the brothers had handed over $5,000 to “accelerate the process to issue the passports” and that she “never suspected” intermediaries dealing with the request would have submitted false information to authorities.

Her lawyers also denied she had paid Ronaldinho to come to Paraguay or that she was involved in business with him.

But the arrested businessman, Wilmondes Sousa, claimed Lopez was responsible for making the fake passports.