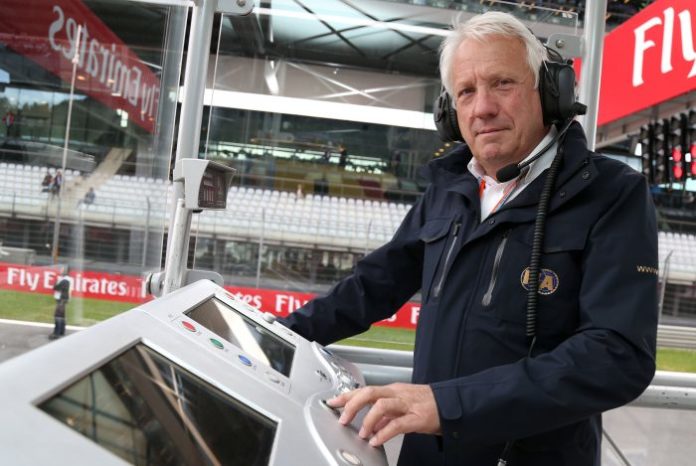 It was an year ago on this very day, that Formula One lost a very prominent man of the races – Charlie Whiting. Looking back, his journey with the sport has been nothing short of fulfilling.

To regular F1 spectators, Charlie Whiting was known as the white haired man who turned the lights to green when the race began. But to the motorsport world he was much more than that.

He would spend the evenings and school holidays fixing cars with his brother Nick in Kent, and that’s where his Passion arose. Passion and a true calling for the sport led to his foray into Formula 1 in 1977 where he began working for Hesketh Racing. It was just the beginning of his contributions that would last more than four decades in the years to come. Hesketh gave James Hunt his first drive in F1 which folded in 1978, and Whiting went on to join Brabham, then owned by Bernie Ecclestone.

From Mechanic to Race Director

He rose through the ranks in the team and served as the chief mechanic for Nelson Piquet at his championship successes in 1981 and 1983 and later as the chief mechanic for the team. When Ecclestone sold the team, the role of a gamekeeper allured Whiting and he ended up taking a role within the sport’s governing body, the FIA – eventually becoming race director in 1997. Over the last two decades, Whiting pretty much donned the hat of F1’s lead referee – analysing incidents, detecting wrongdoing and taking a lead in promoting safety which is truly critical to the sport. One of the notable incidents in his career occurred in 2005, when all but six drivers completed the United States Grand Prix due to tyre woes.

People raised concerns over the safety of these tyres which were brought to the Indianapolis Motor Speedway by Michelin and Whiting was asked to alter one of the corners which would allow seven teams to race comfortably. However, he refused, which led to the farcical sight of 14 cars retiring after the parade lap.

In a letter to the teams at the time, he said: “To change the course in order to help some of the teams with a performance problem caused by their failure to bring suitable equipment to the race would be a breach of the rules and grossly unfair to those teams which have come to Indianapolis with the correct tyres.” Fairness and safety were extremely important to Whiting. He was often referred to as Charlie in the paddock and on the radio, especially when drivers felt an incident required further investigation.

He would rigorously and religiously inspect circuits, checking a range of new circuits on the GP calendar for suitability, along with improvising safety measures in the cars. Whiting was one of the few people who supported the introduction and usage of the halo device, which actually helped Charles Leclerc avoid severe injury in the aftermath of a huge accident at the Belgian Grand Prix.

With more than 400 Grands Prix under his belt, Whiting was an irreplaceable entity of the sport. He was once quoted saying: “I still love it. The buzz is extraordinary. It’s rare I find myself thinking ‘well, this is boring’.”

The man’s journey has been inspirational – from fixing cars to being one of the biggest assets at Formula One. Following one’s passion without the support of a red carpet laid out for you, and enjoying work for 40 years despite essaying a role that never attracted the spotlight – it truly speaks of his commitment to building Formula One to what it is today.