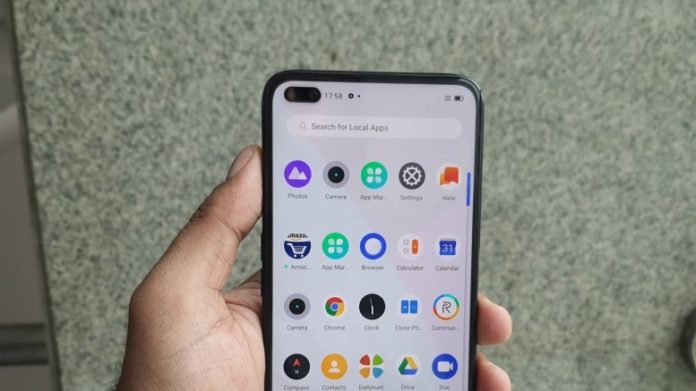 (IANS) After creating a formidable space in the India smartphone market, Chinese smartphone manufacturer Realme is looking to disrupt the mid-price segment further and has launched two smartphones — Realme 6 and 6 Pro — with the company’s own user interface based on Android 10 software.

The smartphone comes in two colours: Lightning Blue and Lightning Orange. Both the colors look good, but blue is the one we reviewed.

The phone is wrapped in Gorilla Glass 5, both on the front and back.

Let us see how it fares.

Realme 6 Pro features a 6.6-inch LCD display with a dual hole-punch cutout, which gives the device a fresh look.

Watching videos and playing games on this Realme phone was good, thanks to the big AMOLED display with 90hz screen refresh rate and proper placement of front camera.

The power button is placed at the right side and has been flattened in order to accommodate a fingerprint sensor.

The SIM tray has slots for two nano-SIMs and a microSD card, along with volume rockers which are placed on the left.

Meanwhile, the bottom edge of the phone has a single speaker, a USB-C port, as well as a headphone jack.

There is a quad rear camera setup that includes a 64MP Samsung GW1 primary sensor with an f/1.8 lens.

The combination of sensors captured decent photos — pretty good via an under Rs 20,000 smartphone.

At night, we found the primary camera excellent in artificial lights. Night Mode was surprisingly effective and helped balance the brightness.

For selfies and video chat, the Realme 6 Pro comes with the dual hole-punch selfie camera setup that consists of a 16MP Sony IMX471 primary sensor with an f/2.0 lens and an 8MP secondary sensor with an ultra-wide-angle f/2.2 lens that has a field-of-view (FoV) of 105 degrees.

The front camera is fairly good — in the daytime as well as at night — with proper detailing and portrait shots had nicely blurred backgrounds.

The Realme 6 Pro can shoot videos at up to 4K, but only at 30fps and video shot also looked fine, with good stabilization.

The phone packs Octa-core Snapdragon 720G SoC, along with Adreno 618 GPU and up to 8GB of LPDDR4x dual-channel RAM.

Since Snapdragon 720G SoC is a newer chip, it also has new features such as support for Bluetooth 5.1, NavIC satellite navigation, and a more power-efficient Sensing Hub.

The device was powerful enough to handle anything from basic calls to heavy gaming without any trouble.

Apart from PUBG, we also played ”Call of Duty” on high settings without any lag.

Additionally, the device runs Android 10 OS and the OS has Realme UI customization over it.

The 4,300 mAh battery capacity on the Realme 6 Pro is pretty standard.

Conclusion: With good camera and best-in-class performance, Realme 6 Pro is one of the best smartphones in the mid-price segment and a tough challenger for Redmi Note 9 Pro and Note 9 Pro Max.