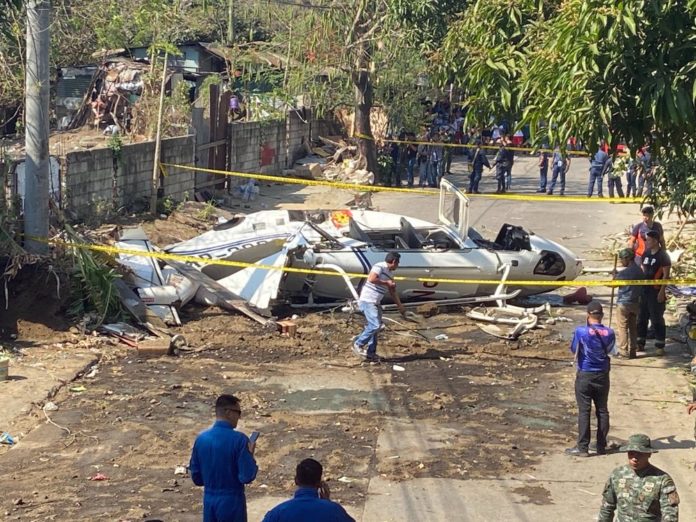 A helicopter carrying the Philippine national police chief and seven other people crashed after hitting a power cable on takeoff Thursday, critically injuring two people on board.

Gen. Archie Francisco Gamboa and the others were pulled from the wreckage by police officers. Gamboa was injured in the shoulder and in the right hand but flashed a thumbs-up and said, “I’m OK,” while being wheeled to an ambulance that brought him to a hospital in metropolitan Manila.

The police intelligence director, Maj. Gen. Mariel Magaway and director for comptrollership, Maj. Gen. Jose Ma. Victor Ramos, were in “critical condition” in a Laguna hospital, while the rest, including the police spokesman and the police flight crew, were in stable condition, police Maj. Gen. Benigno Durana Jr. told reporters.

The helicopter was taking off from a police compound in a rural village in San Pedro city in Laguna province south of Manila after the group met with local police officials.

The aircraft whipped up a thick cloud of dust as it took off, hit a power cable then crashed with a loud thud on a road near houses, witness Glenda Garcia told The Associated Press.

“It was really loud and we ran away in fear because we thought the helicopter would move out of control in a circle and hit us,” Garcia said, adding that power in her village was cut due to the crash.

A motorcycle was damaged but apparently no people on the ground were hurt in the crash. A part of the propeller or rotor blades also hit the roof of a house, Garcia and police officials said.

TV footage showed the white Bell 429 helicopter on its side, with firefighters trying to put out a small fire in one part of the wreckage.

The group had flown to the area to inspect vehicles taken into custody by highway patrol officers for various violations. They were heading to a police camp in the region for more meetings when their chopper crashed, police officials said.

Gamboa temporarily took over the national police force in October after his predecessor retired early after being linked to illegal drugs.

The 200,000-strong police force has enforced President Rodrigo Duterte’s anti-drug crackdown that has left thousands of mostly petty drug suspects dead in a bloody campaign that has alarmed Western governments and human rights groups since he took office in mid-2016.