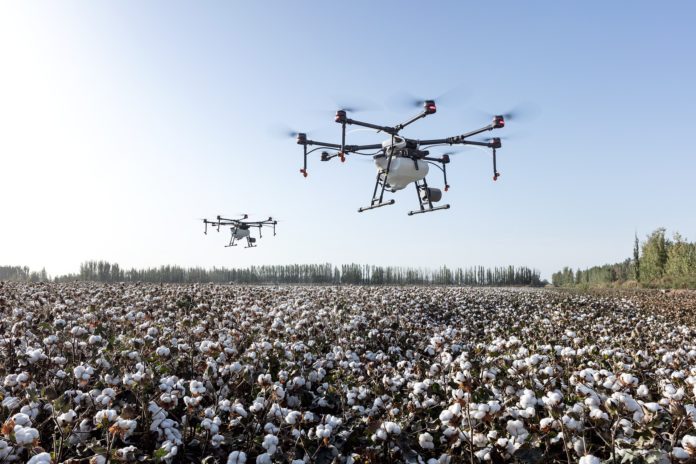 Cotton is a soft, fluffy staple fiber that grows in a boll, or protective case, around the seeds of the cotton plants of the genus Gossypium in the mallow family Malvaceae. The fiber is almost pure cellulose. Under natural conditions, the cotton bolls will increase the dispersal of the seeds.

The origins of cotton production and use go back to ancient times. The first evidence of cotton use was found in India, and dates from about 6,000 B.C. Scientists believe that cotton was first cultivated in the Indus delta, historically a part of Hindu Civilisation.

Cotton bolls discovered in a cave near Tehuacán, Mexico, have been dated to as early as 5500 BC, but this date has been challenged. More securely dated is the domestication of Gossypium hirsutum in Mexico between around 3400 and 2300 BC.

In Peru, cultivation of the indigenous cotton species Gossypium barbadense has been dated, from a find in Ancon, to c. 4200 BC, and was the backbone of the development of coastal cultures such as the Norte Chico, Moche, and Nazca. Cotton was grown upriver, made into nets, and traded with fishing villages along the coast for large supplies of fish. The Spanish who came to Mexico and Peru in the early 16th century found the people growing cotton and wearing clothing made of it.

The Greeks and the Arabs were not familiar with cotton until the Wars of Alexander the Great, as his contemporary Megasthenes told Seleucus I Nicator of “there being trees on which wool grows” in “Indica”.This may be a reference to “tree cotton”, Gossypium arboreum, which is a native of the Indian subcontinent.

Cotton has been spun, woven, and dyed since prehistoric times. It clothed the people of ancient India, Egypt, and China. Hundreds of years before the Christian era, cotton textiles were woven in India with matchless skill, and their use spread to the Mediterranean countries.

In Iran (Persia), the history of cotton dates back to the Achaemenid era (5th century BC); however, there are few sources about the planting of cotton in pre-Islamic Iran. The planting of cotton was common in Merv, Ray and Pars of Iran. In Persian poets’ poems, especially Ferdowsi’s Shahname, there are references to cotton (“panbe” in Persian). Marco Polo (13th century) refers to the major products of Persia, including cotton. John Chardin, a French traveler of the 17th century who visited Safavid Persia, spoke approvingly of the vast cotton farms of Persia.

During the Han dynasty (207 BC – 220 AD), cotton was grown by Chinese peoples in the southern Chinese province of Yunnan.

During the late medieval period, cotton became known as an imported fiber in northern Europe, without any knowledge of how it was derived, other than that it was a plant. Because Herodotus had written in his Histories, Book III, 106, that in India trees grew in the wild producing wool, it was assumed that the plant was a tree, rather than a shrub. This aspect is retained in the name for cotton in several Germanic languages, such as German Baumwolle, which translates as “tree wool” (Baum means “tree”; Wolle means “wool”). Noting its similarities to wool, people in the region could only imagine that cotton must be produced by plant-borne sheep. John Mandeville, writing in 1350, stated as fact that “There grew there [India] a wonderful tree which bore tiny lambs on the endes of its branches. These branches were so pliable that they bent down to allow the lambs to feed when they are hungry.”

Cotton manufacture was introduced to Europe during the Muslim conquest of the Iberian Peninsula and Sicily. The knowledge of cotton weaving was spread to northern Italy in the 12th century, when Sicily was conquered by the Normans, and consequently to the rest of Europe. The spinning wheel, introduced to Europe circa 1350, improved the speed of cotton spinning. By the 15th century, Venice, Antwerp, and Haarlem were important ports for cotton trade, and the sale and transportation of cotton fabrics had become very profitable.

In India between 16th to 18th Century, Indian cotton production increased, in terms of both raw cotton and cotton textiles.

The largest manufacturing industry in this era was cotton textile manufacturing, which included the production of piece goods, calicos, and muslins, available unbleached and in a variety of colours. The cotton textile industry was responsible for a large part of the empire’s international trade. India had a 25% share of the global textile trade in the early 18th century. Indian cotton textiles were the most important manufactured goods in world trade in the 18th century, consumed across the world from the Americas to Japan. The most important center of cotton production was the Bengal Subah province, particularly around its capital city of Dhaka.

The worm gear roller cotton gin, which was invented in India during the early 13th–14th centuries, is still used in India through to the present day. Another innovation, the incorporation of the crank handle in the cotton gin, first appeared in India. he production of cotton, which may have largely been spun in the villages and then taken to towns in the form of yarn to be woven into cloth textiles, was advanced by the diffusion of the spinning wheel across India, lowering the costs of yarn and helping to increase demand for cotton. The diffusion of the spinning wheel, and the incorporation of the worm gear and crank handle into the roller cotton gin, led to greatly expanded Indian cotton textile production.

It was reported that, with an Indian cotton gin, which is half machine and half tool, one man and one woman could clean 28 pounds of cotton per day. With a modified Forbes version, one man and a boy could produce 250 pounds per day. If oxen were used to power 16 of these machines, and a few people’s labour was used to feed them, they could produce as much work as 750 people did formerly.

In the early 19th century, a Frenchman named M. Jumel proposed to the great ruler of Egypt, Mohamed Ali Pasha, that he could earn a substantial income by growing an extra-long staple Maho (Gossypium barbadense) cotton, in Lower Egypt, for the French market. Mohamed Ali Pasha accepted the proposition and granted himself the monopoly on the sale and export of cotton in Egypt; and later dictated cotton should be grown in preference to other crops.

By the time of the American Civil war annual exports had reached $16 million (120,000 bales), which rose to $56 million by 1864, primarily due to the loss of the Confederate supply on the world market. Exports continued to grow even after the reintroduction of US cotton, produced now by a paid workforce, and Egyptian exports reached 1.2 million bales a year by 1903.

The English East India Company (EIC) introduced the Britain to cheap calico and chintz cloth on the restoration of the monarchy in the 1660s. Initially imported as a novelty side line, from its spice trading posts in Asia, the cheap colourful cloth proved popular and overtook the EIC’s spice trade by value in the late 17th century. The EIC embraced the demand, particularly for calico, by expanding its factories in Asia and producing and importing cloth in bulk, creating competition for domestic woollen and linen textile producers. The impacted weavers, spinners, dyers, shepherds and farmers objected and the calico question became one of the major issues of National politics between the 1680s and the 1730s. Parliament began to see a decline in domestic textile sales, and an increase in imported textiles from places like China and India. Seeing the East India Company and their textile importation as a threat to domestic textile businesses, Parliament passed the 1700 Calico Act, blocking the importation of cotton cloth. As there was no punishment for continuing to sell cotton cloth, smuggling of the popular material became commonplace. In 1721, dissatisfied with the results of the first act, Parliament passed a stricter addition, this time prohibiting the sale of most cottons, imported and domestic (exempting only thread Fustian and raw cotton). The exemption of raw cotton from the prohibition initially saw 2 thousand bales of cotton imported annually, to become the basis of a new indigenous industry, initially producing Fustian for the domestic market, though more importantly triggering the development of a series of mechanised spinning and weaving technologies, to process the material. This mechanised production was concentrated in new cotton mills, which slowly expanded till by the beginning of the 1770s seven thousand bales of cotton were imported annually, and pressure was put on Parliament, by the new mill owners, to remove the prohibition on the production and sale of pure cotton cloth, as they could easily compete with anything the EIC could import.

The acts were repealed in 1774, triggering a wave of investment in mill based cotton spinning and production, doubling the demand for raw cotton within a couple of years, and doubling it again every decade, into the 1840s

Indian cotton textiles, particularly those from Bengal, continued to maintain a competitive advantage up until the 19th century. In order to compete with India, Britain invested in labour-saving technical progress, while implementing protectionist policies such as bans and tariffs to restrict Indian imports. At the same time, the East India Company’s rule in India contributed to its deindustrialization, opening up a new market for British goods, while the capital amassed from Bengal after its 1757 conquest was used to invest in British industries such as textile manufacturing and greatly increase British wealth. British colonization also forced open the large Indian market to British goods, which could be sold in India without tariffs or duties, compared to local Indian producers who were heavily taxed, while raw cotton was imported from India without tariffs to British factories which manufactured textiles from Indian cotton, giving Britain a monopoly over India’s large market and cotton resources. India served as both a significant supplier of raw goods to British manufacturers and a large captive market for British manufactured goods. Britain eventually surpassed India as the world’s leading cotton textile manufacturer in the 19th century

India’s cotton-processing sector changed during EIC invasion in India in the late 18th and early 19th centuries. From focusing on supplying the British market to supplying East Asia with raw cotton. As the Artisan produced textiles were no longer competitive with those produced Industrially, and Europe preferring the cheaper slave produced, long staple American, and Egyptian cottons, for its own materials.