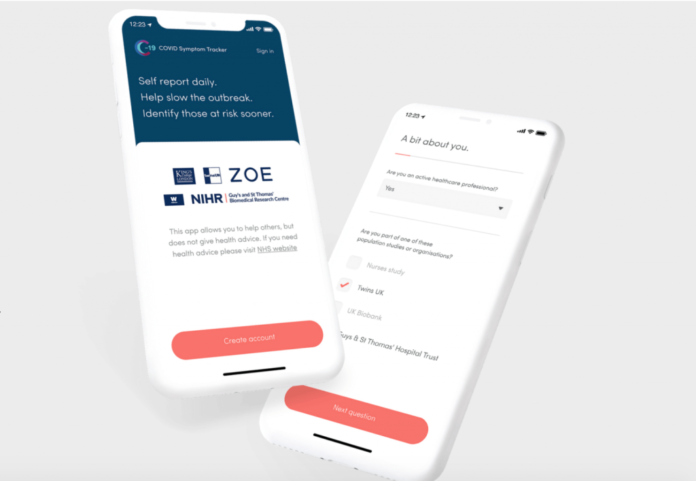 (IANS) In order to fight the COVID-19 pandemic, British researchers have launched a new app that tracks symptoms related to the virus, allowing anyone to self-report daily.

According to the researchers at Kings College London, around 5,000 twins and their families across the UK have been recruited from the ‘TwinsUK’ cohort study to trial the app, which tracks in real-time how the disease progresses.

TwinsUK is a scientific study of 15,000 identical and non-identical twins, which has been running for nearly three decades. At least 5,000 members of the existing twin cohort and their families are expected to sign up for this new study.

The aim of the free ‘Covid Symptom Tracker’ app is to help slow the outbreak, by helping researchers identify: how fast the virus is spreading in your area, high-risk areas in the country, who are most at risk and by better understanding symptoms linked to underlying health conditions.

According to the university, the app will record information about their health on a daily basis, including temperature, tiredness and symptoms such as coughing, breathing problems or headaches. Any participant showing signs of COVID-19 will be sent home a testing kit to better understand what symptoms truly correspond to the coronavirus infection.

Researchers believe this is clinically urgent given the current limits on testing. The app will be also available to the general public without the home testing component of the study. Comparing genetically identical twins with non-identical twins, who are as related as regular siblings, will enable researchers to separate the effects of genes from environmental factors such as diet, lifestyle, previous illnesses and infections, and the microbes within the gut (microbiome).

Samples taken from the twin group will be used to generate a biobank for use in future research projects investigating infection and immune responses. Researchers believe that the data from the study will reveal important information about the symptoms and progress of the COVID-19 infection in different people, and why some go on to develop the more severe or fatal disease while others have only mild symptoms.

It will help the urgent clinical need to distinguish mild coronavirus symptoms from seasonal coughs and colds, which may be leading people to unnecessarily self-isolate when they aren’t infected or inadvertently go out and spread the disease when they are, they said.

The free monitoring app has been developed as a partnership between researchers at King’s College London and health data science company ZOE, itself a spin-out from King’s, and will be widely available to health staff and the general public who wish to contribute to this research.

It will also be used by other large population studies in the UK and the US.