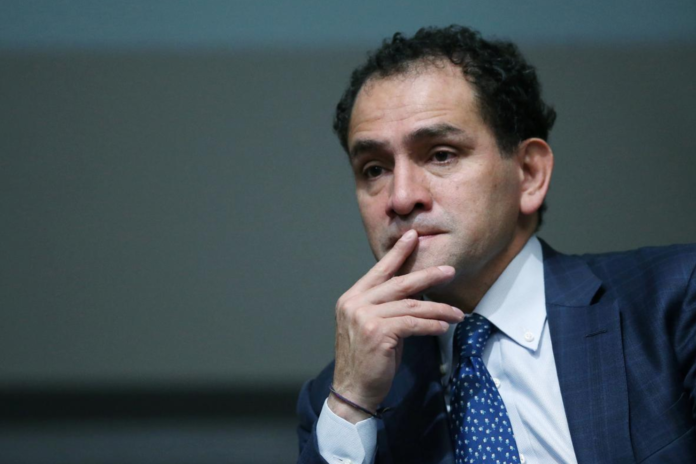 Mexico will soon invite private firms to invest in oil and gas projects to help a flagging economy hit by the fallout of coronavirus, Finance Minister Arturo Herrera said on Wednesday, but cautioned energy auctions were not on the cards for now.

Herrera said a long-awaited energy plan will be unveiled soon that will detail where and how much private firms can invest.

“It’s not just a general outline, we’re going to tell them this project here, here and here, this amount and size is open to investment,” Herrera said in an interview on the sidelines of a banking conference in Acapulco.

Under President Andres Manuel Lopez Obrador, Mexico has pursued a more statist approach to the energy sector and suspended auctions of oil fields.

Lopez Obrador said last week the energy plan could be unveiled in March, after weeks of delays. The balance of public and private investment the plan will aim for has not been clear because of differences of opinion in the cabinet over energy policy.

Also last week, Mexico’s private sector presented the government with a broad package of proposed energy investments worth almost $92 billion. Herrera’s comments suggest at least some of those proposals could be adopted.

Some members of the government believe attracting more private capital is vital for lifting growth and that restarting auctions would send a strong message to investors that Mexico is open for business.

Herrera has in the past signaled the issue should be reconsidered, despite the ongoing suspension.

But Herrera said even auctions for joint venture projects with state oil company Petroleos Mexicanos (Pemex) were not viable, after a rout in oil markets this week caused by a drop in fuel demand from the coronavirus outbreak and the collapse of a production cutting deal between major producers.

He said he did not “think it makes sense considering where oil prices are.”

Prices fell again on Thursday amid a broader market drop after the United States restricted travel from Europe following a declaration that the coronavirus outbreak is now a pandemic.

Layla Vargas, director of energy consultancy Muvoil Consulting said that while some oil companies may view Herrera’s invitation with skepticism in the current economic climate, the right terms could attract them.

“What the country needs right now is investment,” Vargas said.

Mexico’s economy suffered a slight recession last year, its first in a decade. The central bank has cut its growth outlook for 2020 to between 0.5% and 1.5%.

The global economy, including Mexico, was expected to recover this year following the lackluster 2019 but because of the wide-ranging impact of coronavirus “the whole outlook has changed,” Herrera said.

“We’re going to have to reevaluate our projections considering everything that is happening … the parameters have changed completely,” he said, adding the government will publish new economic forecasts for Mexico on April 1.

Herrera outlined a number of plans to nudge the economy into life, including bringing forward budgeted government spending and incentives for companies to invest in infrastructure.

He did not indicate a loosening of the government’s strict fiscal goals, saying accelerating spending was a “more efficient” way of stimulating growth than raising spending. He said Pemex should spend its budget quickly too.

“What we have to do is make sure in this context that Pemex is executing its investment program on time and in a clear manner,” Herrera said.