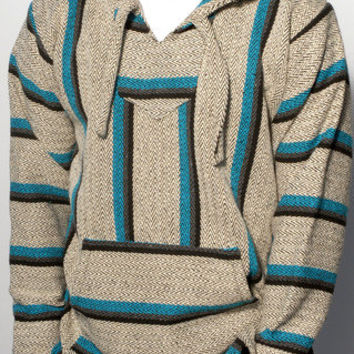 Do you know what a baja poncho hoodie is? If not, let me tell you what they are in the next couple of paragraphs. You have seen them before, I can almost promise you that. They are the hippie looking sweater that many people used to wear in the 80’s and now they are becoming just as popular in 2020. They are made of a material that is cotton and acrylic but they look like they could be made of hemp.

It is a type of Mexican jacket with a single large pocket on the front, and vents on the side.They are more commonly made out of llama fur which dates back to Mayan and Incan tribes using them to make fur jackets now known as Baja jackets.

They are often decorated with patterns consisting of horizontal stripes on the sleeves and hood, and vertical stripes down the rest of the jacket.

The drawstrings are often flatter and more rectangular than most jacket drawstrings, and always made of the same material as the rest of the jacket.

In the 1970s, Californian surfers brought these hooded shirts back from surf trips to Baja California in Mexico. They became associated with surfers and surfing in Mexican coastal towns and were worn as beachwear in cool weather. The shirts, called “sudadera de jerga” (“slang sweatshirt”) in Mexico, are also traditionally worn by Mexican-Americans.

They are also quite popular in colleges and college age kids and this is quickly spreading to high schools and middle schools. They are attaining popularity because the dress reflects your likeliness to be comfortable and stylish at the same time. There are many colours that you can choose from. This is great because it is always embarrassing when someone else is wearing the same thing that you are. They come in almost any size that you can think of as well.

This means that from the smallest kids to the largest man or woman can wear one. They go all the way up to XXXL hoodies that you can pick from. They tend to be made of 3 colors that are in vertical stripes on the hoodie. Plus, you also find pockets on the front that has stripes going the other way and this makes the Baja Hoodie stand apart from other sweaters that you may see around.