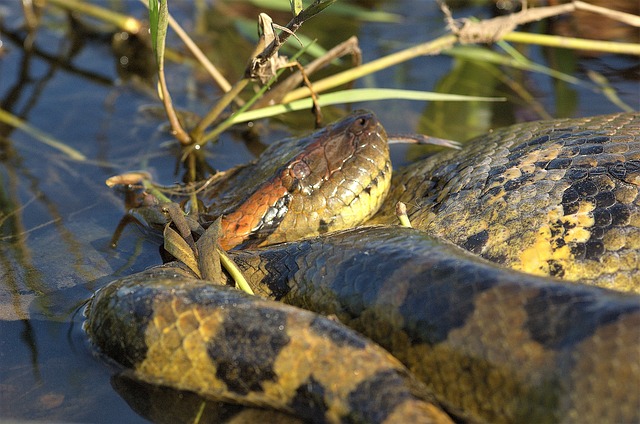 Anacondas or water boas are a group of large snakes found in tropical South America. Four species are currently recognized. Although the name applies to a group of snakes, it is often used to refer only to one species, in particular, the common or green anaconda, which is the largest snake in the world by weight, and the second longest.

Everyone has some idea about Anaconda snakes. Most will know that such reptile is a giant snake, lives in marshlands and is a deadly hunter. However, most do not know how big or long an anaconda really is. Here are some little known facts about the Anaconda:

To the naked eye the anaconda appears to be 20 feet and the average per pound per this enormous reptile is 550 pounds. The diametric circumference goes around a full 12 inches. With these numbers you can start to imagine how huge anacondas currently are in real life. In the past, people have claimed they have seen anacondas up to 50 meters and more, but how many of these truths hold cannot be known.

The body of a full grown anaconda is extremely muscular with smooth scales while having black ovals on the back for most of these reptiles. With its glistening smooth scales and its alternating black and brown oval spots, these anacondas are very attractive creatures to look at when encountered. Question being, would you be able to encounter one of these anytime soon? Probability being, no!

However, if you happen to be in Florida, South America and the habitat places like the ones discussed in many other articles – probability is – you might see one in a close encounter. But mostly, you will now be able to spot them at your local zoo if you happen to be privilege to live in goold, old US.

Among other facts, the eyes and nostrils are on top of their heads. This makes it easier for them to breathe as well as look for their prey while keeping their body submerged under water for a maximum period of time.

In respect to habitat – since the anacondas are semi-aquatic – their habitat usually comprises of pools, slow-moving rivers, swamps and forests that are flooded. Most number of anacondas are found in the tropical rain forests of the northern region of South America known as the Amazon forests.

These Anaconda snakes stay under water for just over 10 minutes and usually they use the trick of staying under water to catch their prey. They hunt during the night and mostly in the swampy areas. Their skin acts as a camouflage and helps them to merge with the surrounding areas of the swamp.

Hence, hunting for prey is made easier. The smooth scales help them to move through the waters with great agility and speed like a shark is to an ocean. The anacondas are geographically distributed in the tropical rain forests of South America; Brazil, the northern parts of Bolivia, Colombia, north-eastern regions of Peru, Venezuela and in some humid locations of warm tropical places like Trinidad and Guyana.

Because of the color of their skin these reptiles are difficult to spot in the wild. Once in a while, when the cold wind blows one can see them out in the land basking in the warmth of the sun. Anaconda snakes like humans also need there dose of Vitamin. Actually, they need and use vitamin D more than our bodies consumes it.