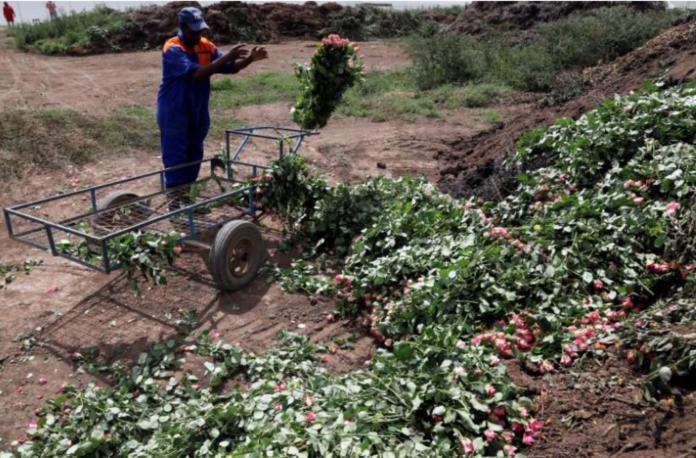 An armful of roses would brighten most people’s day, but for Kenyan farmer Inder Nain being surrounded by colourful blooms is a nightmare. His farm is dumping hundreds of thousands of roses after the coronavirus made flower exports collapse.

“We are just clipping the flowers and throwing them away,” Nain told Reuters.

Usually, the roses would fly from his farm in Kenya’s majestic Rift Valley to customers all over the world. But with almost 220,000 cases of coronavirus globally, and nearly 9,000 deaths, borders and businesses are shut. Few people are thinking about flowers.

Most of Nain’s roses go to an auction in the Netherlands to be sold throughout Europe, to decorate weddings and funerals, given by courting couples or old married folks.

But the weddings and funerals are mostly on hold as people avoid large crowds. Couples are stockpiling toilet paper and old people are sequestered at home. European leaders are sealing off external borders for at least 30 days in response to the outbreak.

So Nain’s roses are going to the rubbish heap.

“There is no demand,” he said sadly. “If this were to continue for another one month, we are looking at a complete shutdown.”

Europe accounts for 70% of Kenya’s cut flower exports. The restrictions have slashed daily orders in half, said Clement Tulezi, chief executive of the Kenya Flower Council, an industry body.

During a recent trip to Europe, Tulezi said he saw shops just giving away bouquets for free, unable to sell them before they died.

“They (customers) cannot go out and get those flowers because they have fear for their own health,” he said. “We have seen flowers being poured out in tonnes, they are just destroyed.”

The decline in exports will is a blow for Kenya, East Africa’s richest economy. Flower exports are one of the top three foreign exchange earners; they generated 104 billion Kenyan shillings ($1 billion) in sales in 2019. Other sectors like tourism and agriculture are also being battered.

The plunge in exports means jobs are at risk, Tulezi said. The industry employs about 150,000 workers. Most are women because companies think their delicate touch does not damage the blooms.

At Nain’s farm, 2,000 people usually work to ship 350,000 roses a day all over the globe. Now only 50,000 flowers are going out. His company Xflora group has put half its workers on 15 days of unpaid leave; when they return, the other half will go.

“There is just no more work. Even if we harvest the flowers, what do we do with them?” he said.