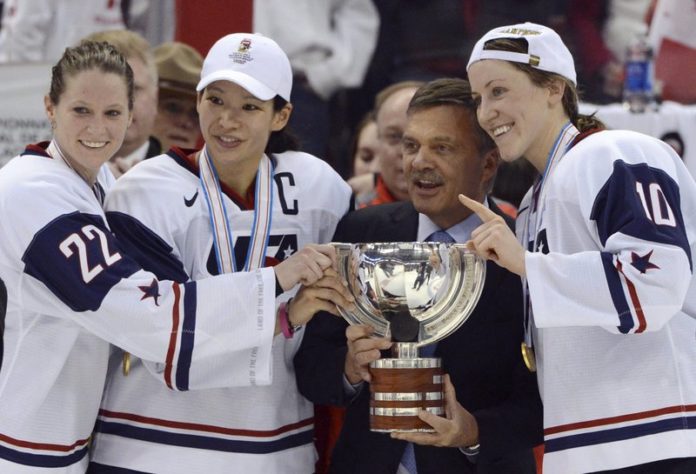 The women’s world hockey championships in Canada were canceled Saturday because of public health concerns over the spread of the new coronavirus.

The two-week tournament was set to open March 31, with venues in Halifax and Truro, Nova Scotia.

René Fasel, president of the International Ice Hockey Federation, said in a statement there has been “not enough of an improvement to the coronavirus situation to allow us to safely host a 10-team international tournament within this time frame.”

Fasel told The Associated Press by phone the decision was made by conference call. He noted the concerns over the health of players and fans attending the tournament as well as the difficulties in making travel plans for some nations. In particular, Japan, where almost all sports events and large gatherings have been canceled.

Hockey Canada CEO Tom Renney said abandoning the tournament was determined to be “the best course of action,” and made under the recommendation of Nova Scotia’s chief medical officer and the IIHF.

“This decision was made in the best interest of the players, fans, staff, volunteers and the general public,” Renney said in a statement. “We fully support the IIHF’s decision.”

Renney said the IIHF has assured Hockey Canada that next year’s world championships will be in Nova Scotia.

The women’s worlds were canceled once before — the 2003 tournament in Beijing because of the SARS outbreak in China.

The escalating virus outbreak has played havoc with numerous sports events across Europe and Asia with games being canceled or played without spectators.

Fasel said the status of other international hockey tournaments will be determined in the coming month, starting with the under-18 men’s championships in Michigan from April 16-26. Fasel said a decision on that tournament likely will be made within 10 days.

The IIHF will await until mid-April to determine whether to proceed with the men’s world championships set to open May 8 in Switzerland.

“For sure, we are concerned and we are monitoring this,” Fasel said.

The Canadian women were seeking a chance to bounce back on home ice after finishing third last year in Finland. The U.S. beat Finland in the championship game to win its fifth consecutive title and ninth overall.

“We fully respect this difficult decision and know it was made with the best interests of everyone involved,” USA Hockey spokesman Dave Fischer said. “We’re disappointed for our players and staff who have worked so hard in preparing for this event, and for the fans that were looking forward to watching the best athletes in the world compete for a gold medal.”

Halifax Mayor Mike Savage posted a note on his Twitter account, saying: “This is tough for players, fans organizers and our local Halifax community. But a sound decision based on public health recommendations. We look forward to hosting when the time is right.”

The cancellation comes at a time when women’s hockey in North America has already been disrupted. In May, U.S. and Canadian national team members were among more than 200 of the world’s top players to vow not to compete professionally in North America this season following the demise of the Canadian Women’s Hockey League.

They then formed the Professional Women’s Hockey Players’ Association to demand the formation of a single league with a sustainable economic model.

The association has been holding barnstorming tours across North America, with the last stop this weekend in Phoenix.

“This has been a very unique and difficult season,” said Gina Kingsbury Hockey Canada’s director of women’s national teams. “Turning our attention towards the 2021 world championships, nothing changes in our preparations; we will continue to build our team and focus on competing for a gold medal on home ice next year.”

The virus has led to the NHL and NBA considering taking precautionary measures.

On Friday, the NHL issued a memo to its teams urging players to limit contact with fans. The move followed a similar directive this month by the NBA, which has told its players to stop high-fiving fans and strangers, and avoid taking items for autographs.

NHL Commissioner Gary Bettman said Wednesday at the general managers meetings in Florida that he’s ordered a halt to all business-related travel outside North America for league employees.